The Top 7 Creative Ways To Defeat A Superhero

by Richard Pruitt 7 years ago1 year ago

In this edition of The 7s, we are going to jump into something very Nerdy and will cause some controversy among those males out there who don’t get any. The Top 7 Creative Ways to Defeat a Super Hero. Whether it’s made by a man or a radioactive bug or you have a ton of money, or just born awesome, Super Heroes have the ability to pretty much stop anyone at any given time. Well, this list is specifically intended for the bad guys out there. Your Doc Oct, Riddler, Whiplash, and magneto’s of the world, this is your cheat sheet to finally achieving world domination.

#7. Aquaman is the biggest pussy of the Super Hero world. His main power is talking to the sea creatures to help him get out of situations. Fisherman everywhere beware, you might get attacked by a killer flounder. I was thinking there has to be a way to stop this wuss bag from saving the world. Pretend you are a Trip Advisor. Make this be believable as possible. You can’t let it fall by the way as those shitty phone scams that prey on the elderly. Tell, Aquaman that he has won an all-expenses paid vacation, but don’t tell him where. Unsuspectingly, he will get on a plane and be headed to the one place in the world that no one can help him. The Sahara Desert. Flipper won’t be able to save him out there. One other way you could take out the aquatic hero as well. Litter. Aquaman, may be able to kick all kinds of ass but chances are he would not be able to do anything stuck in a plastic six pack ring. 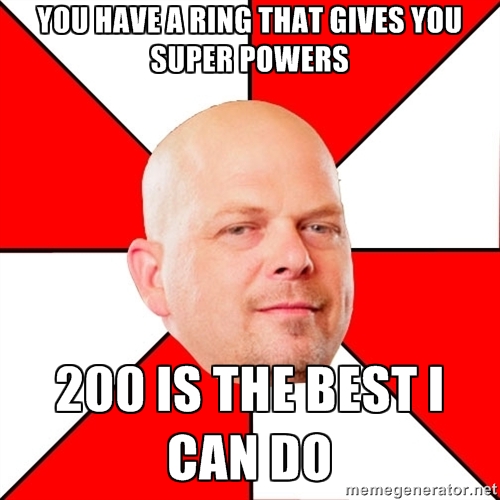 #6. The Green Lantern’s powers come from the ring he found. One ring to rule them all. Makes me wonder if it is the same Ring from The Lord of the Rings, just from the future. It somehow made it back to the present. Ok, that was a little too much nerd thinking. Here is what you do. Befriend The Green Lantern. Get him into your Fantasy Football League. Have each member host a game at their place of residence. He can’t be the first house. When it becomes his week to host, pretend the chili he made gave you the runs. As you go to the bathroom, steal the ring. Download the Fake A Call App. That way right after you steal it, you can leave and no one is the wiser. You are going to hope in a car and drive to Las Vegas Nevada. You are going to take that ring into the pawn shop that is featured on Pawn Stars. Rick will look at it and decide he needs an expert to come look at it. The expert will tell Rick that the ring is worth about 200 in gold. You get 200 and destroy the Green Lantern in the process. If you can’t travel, use cash for gold.

#5. If Wonder Woman, catches you in her Lasso of truth you are pretty much screwed. Here is what you do to beat her. You get her alter ego to start dating you. You have to win over which will be tricky, but who said being a bad guy was going to be easy. You date her for a year or so and one night during sex, forget to wear a condom. This is a big step in destroying who she is. Keep repeating that step until you knock her up. That is really going to be a chore isn’t it? During the Pregnancy, she will develop morning sickness, this is when your reign of terror can begin. Nine months of people not being saved by their hero, the people will rise up and lynch her. Leaving you with everything and a baby.

#4. Batman doesn’t really have any super powers but he is in comic books so he counts for this list. Here is what you have to do. Build a time machine. Go back in time and convince Bruce Wayne that Circuit City is going to be the biggest company ever. He puts all of his assets into that business. Take the time machine back to the present. Since Bruce can’t fund all of his Batman gear since he is more broke than Nicholas Cage. Kill him. It really is that simple.

#3. A guy gets bit by a radioactive spider and takes on the characteristics of a spider. Seems like nothing is really going to be able to stop the Spiderman. Well, you thought wrong. Mug a woman. This will get his Spidey senses tingling like its Christmas morning. He gets there to see you pretty much push down an old woman. The old woman is ok. I want to clarify that before continuing. Spiderman comes after you, because you did something bad. When he gets close enough, spray him right in the face with a can of Raid. Problem Solved.

#2. Tony Stark is a rich genius who came up with one awesome suit. Iron Man has quickly become one of my favorite Super Heroes. That suit is pretty much invincible. There has to be some way out there to destroy him. Simple. You have to have 20 bucks and be able to get close to him. Take your 20 bucks and head down to your local Wal Mart and purchase the product call EZ Open. This is the can opener that does the work for you. Make sure you get batteries too. Next step, find Iron Man. Walk up to him in the middle of a fight. Place the can opener on the suit and let the magic happen. The front half of the suit falls off and you can kill the genius of Tony Stark.

#1. The main man in the X-Men beside Professor Xavier is Wolverine. A man beast who has claws and has one bad ass killer instinct. However, he always seems really wound up. The Hormones are almost flowing way too much. There is one simple solution for all of this. Get Logan to go to Mexico with you. Have him drink some tequila and cervezas. Make him believe that he has some sort of alcohol poisoning. Take him to a doctor, the doctor says he has to perform a surgery or he will die. What I have left out, is that the doctor is actually a Veterinarian. That life or death surgery is getting Wolverine neutered. Now you have one less X-Men member to deal with.