Recently I came upon a quote made about feminism. The quote goes like this:

“Why do feminists hate men?” Why does a movement for women become so misunderstood to the point where it’s still about men? 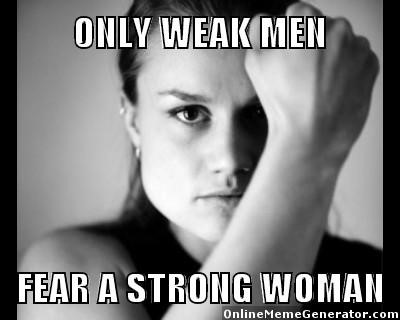 That seems to make a lot of sense when you decide to let it the words sink in. I consider myself a feminist. The term was always defined mentally had been ‘strong woman’. The reason internally why I believe this statement to be true is that I think we deserve a chance to be treated the same as the opposite sex.

Sometimes when I mention the fact that I am a feminist, I am named a man-hater. That could not be any further from the truth. In fact, some of my closest friends are men. I think I am mentally able to be held at the same standards as men. I even think like a man. I am married to a man, not even a girly man that can be easily dominated. No, I married the blow shit up, ex-military, and proud veteran type of man.

I think the reason feminism has been closely related to the term “man-hater” is because we are strong levivard.com women. We do not like to be related as fragile creatures. We like to venture outside of the kitchen stereotype and make a name for ourselves in the workplace. Sometimes we even kick ass. If we put our mind to it, we can be the best out there to offer. We are strong-willed. We can also to the workload of ten people combined. Some men just find us as a threat.
Some political leaders play feminism as our weakness. Even I can see through their lies. Our own president used abortion ads to make us think we had something to prove. Just to win our voices. He played us like fools. The fact is that we don’t have anything to prove. We are already strong-minded, freethinking, and intelligent women. We shouldn’t let people decide our own path.

The truth is we shouldn’t be having someone tell us we have something to prove. We are better than that. If we stuck our minds to it, we could one day be fully held in the same respect as the opposite sex. Instead of fighting, we should be united. Wasn’t our right as freethinkers what feminism was truly founded for?

Hi, my name is Amber aka blur. Blur is a childhood nickname my dad gave me because of my ADHD and that’s all he ever saw of me. I like to call myself a nerd gamer extraordinaire. I spend most of my time writing, gaming, and watching TV. I have a huge addiction to British television. My obsessions are Doctor Who, Sherlock, & Orphan Black. I am happily married to the love of my life and we have two cats named Charlotte & Mina. We also have a huge dog who thinks he’s a baby named Maximus. Our idea of a good weekend is lots of coffee, big bowls of cereal, and gaming on our separate TVs that are in the same room with separate headsets. I have way too many talents and not enough outlets. Not only do I write, but I sing, draw, play guitar, sew, craft, cut hair, dye hair, and many more. I’ve heard that genius borders insanity and I tend to cross between the two constantly. Other than that I love music, my furbabies, and documenting everyday life .I believe that if you aren’t living life if you hate your job so find something you love and stick with it and your happy ending will soon follow behind. Don’t take life so seriously, No one makes it out alive anyway.