The Hall: Lily from AT&T

by Richard Pruitt 6 years ago3 years ago

This Sunday just happens to be the biggest sporting event of the year. It is an event that people sit around and speculate on who will win with predictions and Vegas betting odds. I too am also excited for the Puppy Bowl this year. It is going to be a dog eat dog contest. Oh yeah and there is some football game too. As many of us know unless you’re buried under a rock, the Super Bowl is this Sunday, and I have to tell you, I am not excited at all. I think I am more excited about working out. The game this year is surrounded by controversy that puts a damper on the game. Because I want to see a game between one teams who deflates their balls and another who takes a drug to shrink theirs. So, while I am not excited about the game, it does give me a chance to be excited about the halftime show. I love Katy Perry, don’t judge me. At the worst she will be better than the Black Eyed Peas. However, I think William Hung could have been a better halftime performer. And the commercials… There is at least one thing each year, for 30 seconds we will not be let down. Whether it be about something that makes our choices cloudy, that turns an average single person, to married in someone’s living room. Or a product that automatically makes you cool for just eating. Want to know how you can tell a hipster gamer from everyone else? They reek of Mountain Dew and have permanent Doritos stains on their fingers. The ads are what makes a lot of people tune in each year, and I thought, who would be a great induction to the Hall of Hotties from the world of ads? I was sitting down to watch the newest episode of Dance Moms; an ad ran, and I fell in love. I didn’t know my heart had rollover minutes. The next induction into The Hall of Hotties is….. Lily: The AT&T Saleswoman. 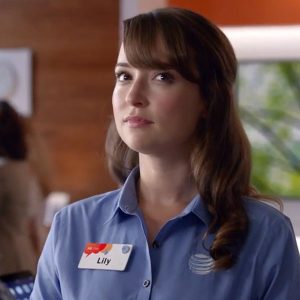 I have to say that I was once a customer of AT&T. The reason I left was the crazy priced service and the fact you can spend money playing Candy Crush. Seriously, who spends money playing a game on their phone when there are free ways to cheat? Lily is the saleswoman who has been a part of the AT&T ads for the better part of the year, and I hope they do not stop at all. Something about her is so sweet and innocent. It actually makes me want to bring her home to Mom, so that she can tell her how terrible Verizon is. Her smile reminds me of an electric blanket, so warming and gives you the feeling of comfort. I think that I would have kept my AT&T service to just see Lily every day. I know that comes across a little creepy, but come on… You can’t tell me that you would show that you have more bars in more places. She has had conversations with the best of them, including Gordon Ramsey. He couldn’t even yell at her, what does that tell you?

We would like to welcome Lily: The AT&T Sales Woman into The Hall of Hotties.