Crying Into My Cake: Shitty Hat 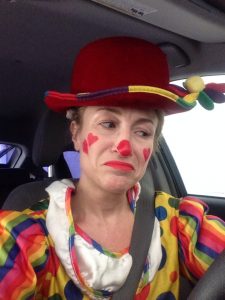 I got a text from the boss that said I was needed for a birthday party last minute, and she would pay me a $25 more for the trouble. I said ok. I finish my 3rd vodka soda.
On the day of the party, I arrive at a house that has a “Beware of Dog” sign. I’m a dog momma, I love dogs, and I usually don’t judge a dog by his warning sign. But this warning sign had teeth marks in it. Christ.

I knock and knock and knock. No one. I knock some more. No one. Then I hear the music turned up. Loud old school rap. I think, this 3-year-old must be an old soul! I follow the bass and arrive in a back yard. Everybody turns and stares.

The mom runs over and grabs my arm.

Mom: “What are you doing back here? You’re supposed to be a surprise!”
Me: “Oh, sorry! I didn’t know!”
Mom: “Ughgg! Whatever. Where are you doing your show?”
Me: “This happens a lot, I don’t do a show really, just entertain with face paint, and balloons and stuff.”
Mom: “…like a show? That’s a fuckin’ show!”
Me: “I guess it is.”
Mom: “That’s why I said show, shit. Ok, set up your show in the front yard, but watch for dog shit and don’t be too loud, the dogs will get upset.”
She runs off to the backyard. I turn around and realized there was a woman sitting on the porch the whole time smoking.
Me: “Hello.”
Her: “What kinda show you doin’?”
Me: “A really amazing one. I use live animals in the magic show; then I do an illusion where I make myself disappear in a puff of smoke. It’s all mirrors though, so don’t be worried.”
Her: “Oh shit, animals? The dogs don’t like that.” 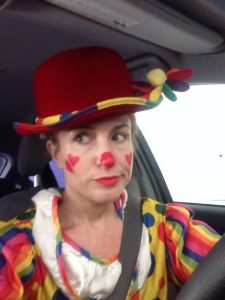 She looks down and starts smoking again and never again looked up.

I set down my dirty parachute, take out my filthy face paint, lay out my broken balloon blower, and wait.

I feel a vibration. I don’t know of it’s from the ground or from my intuition warning me danger is near, like how you can sense a rattlesnake is near you by the hairs on your arms sticking up when you’re on a hike or puking on a mountain when you go camping.(I mean…not that I would know! I don’t camp.)

I turn around, and I see roughly 250 people pour out from the backyard (huge, HUGE exaggeration, it was like 50, but felt insane). It was like in Fantasia, the Disney movie when the broom breaks and turns into many other brooms. There was a shitload of brooms coming at me.

My mouth drops open to say something, and at that moment a man with a neck tattoo of a vagina or flower or vagina looking flower run over and says:
Man: “I’m the guy who hired you. I’m grandpa.”
Me: “Ok.”
Man: “When Rudy* comes out you say “I’m a good friend of your grandpa and he wanted me to surprise you”, and he’ll know what that means.”
Me: “What does that mean?”

Then the kids came out followed by the dogs. Dogsssssssss. 15 maybe? Not big, but small and filthy. They knew it too. They felt bad about how dirty they are, and it was evident in their terrible personalities. They felt like, “Look, I’m a dog, I never get pet or washed, and I’ve grown to love the taste of my own dick, so I’m owning it! Growl! Snap! Shit! Piss! Rinse! Repeat!”
Rudy, who I was told, was 4, looked like he’d already gotten into the cake. I’m not making a chubby reference, although he was a large kid (where’s Michelle Obama when you need her?!) it was the fact that he was literally covered in his cake. He was shirtless, and his entire face, torso, one knee and socks had cake on them. He even had a bit on his back. His back?!
He walked up to me chewing. The grandfather says “Go!”, and I say, “Hi Rudy! Are you the birthday boy?”

Rudy doesn’t answer. He continues to chew. I see him eye one of the less filthy dogs, and I think “Fuck, he’s going to eat that dog!”

“So Rudy, I’m an old friend of your grandpas! He wanted me to surprise you! Surprise!”

“Ok, so can the kids come on down here and we can start?” 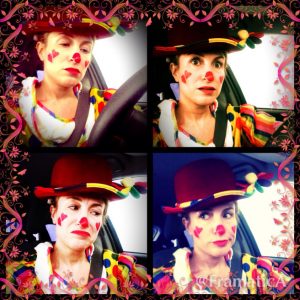 A bunch of men laugh really hard and high five the kid. He smiles and says “Dog shit! Dog shit!!”, again, but the well of recognition has already dried out for these dudes.

I begin my “show”. It’s not going well. Rudy never said a word, only chewed the whole time. Face painting. One of the little boys asked for a rainbow. The men snickered and called him a fag boy. The other kids join in, then the moms. He says, ok, give me a gun. They all cheer. I say I don’t know how to do that, how about a rainbow with dark colors? He smiles. Then grandpa walks up with a beer in his hand and asks if I only paint faces. They guys laugh. I get the joke, but one of them drives it home with, “Can you paint my dick to look smaller?!” His wife, “No Eddie, then she’ll erase it!” I laugh. They stare at me.

The party ends. I say goodbye. I hear a grumble of “That was the show?! I thought she used animals? What the fuck? Hey, did you hear me ask her to paint my dick?” etc.
I gather my stuff in my dirty bin. Everyone returned to the backyard. Then a woman runs out and says, “Thank you so much, he really enjoyed it. We appreciate you coming out!” I thank you so much, feel so much better, and think, aw, it wasn’t that bad.

I walk to my car, then from across the street I hear a young voice yell, “Clown! You gotta shitty hat!” Giggles. Running footsteps.

I drive away wearing that shitty hat all the way home.

*not his real name. Not because I’m trying to protect his identity, but because I can’t remember his name.

Amy Albert recently moved to LA from NYC. She's been a comedian for about 12 years and has toured the US and the UK with her one woman show, Delilah Dix-America's Showgirl. She started out at UCB in New York but made her home at The PIT where she was on a house improv team, a long form musical improv team, and taught improv and characters. Assistance the Series has been featured in festivals and screenings across the country, and Amy is super, duper proud of it! In addition, she wrote The Secret Life of Otters, a web series about a couple of comedians that move to LA from NYC and are super awkward and end up insulting everyone all the time. Like two Larry David’s but one isn't Jewish and both aren't bald. She currently performs with iO West's Headliner Sketch team, The Mutiny, runs a character show every month at The Clubhouse, and has a super sweet 15 pound Yorkie named Dave, who she feeds off the table literally every meal and feels almost no guilt about it. She wrote this herself in the 3rd person and expects your judgment about that. www.laughatamy.com