Figure It Out: Flags,Gays, and God Pacts

If there is one thing that I have taken away from the past week and a half in America, it is the fact that it must be a terrible time to be a White-Southern-Baptist-Bigot-Who-Owns-a-Massive-Truck. And thus this is why you need to be graced by my ever loving cartoon self. If you do not know who I am let me introduce myself to all of you. My name is Stick Figure (I am tired of seeing people complain without knowing any facts. A person can be declared mentally crazy seeing all the posts about flags, gays, and God pacts. Now, the Duke boys have come under fire with the cops tailin’. I know one jump they can’t make, and that is across the legs of Bristol Palin.) Dan. I bet you can take a small guess on what we are going to be talking about on this fine day, and the first two guesses do not count. It is not rocket science people. 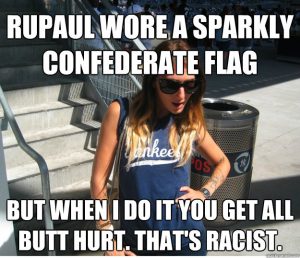 Let me start off with the Confederate Battle Flag! You know the symbol that was a rallying cry during a war that happened over 150 years ago that people just can’t let go of. I don’t what is worse, to hear people say the south will rise again, or the bitching that goes along with The Phantom Menace. I am not sure about any of you, but my Facebook feed looks like the moments right before Savannah was burned to the ground. As many flags as I am seeing posted, you would think the war was still going on. Even I am a little perplexed at some things. I did not realize that your “heritage” is supposed to be flown from the bed of a pickup truck (which is compensating for your small penis size) while going down the highway. It feels like the end of Surf Ninjas, and no one watched that movie. If you have seen the movie, I apologize to the three of you and Rob Schneider. I need reiterate something that people in the back drinking the Bud Light who are too drunk to function need to hear: The South Will Not Rise Again. I am sorry burst your small town bubble on that one. I think there may be better odds of winning Powerball twice while being struck by lightning in the middle of a Sharknado. And speaking of more complaining…. 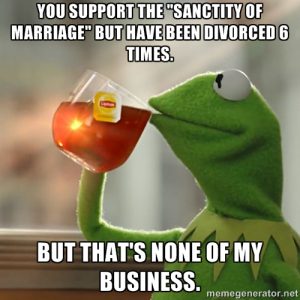 In the past week and a half, the Supreme Court has ruled that marriage is legal for the gay community. What is the first thing that I see posted on Facebook? Allowing gays the right to marry will ruin the sanctity of marriage. I didn’t realize that marriage still had sanctity still left, I feel that maybe, and I could be wrong here, but doesn’t the divorce rate say otherwise. I love the outcry of people who do not want gays to be married, but when a person has as many marriages as they do fingers? Well it’s alright. If that is not backward in this world, I’m not sure what is. The next thing I was fortunate enough to read in the dribble spread all across the land of social media is that gay marriage will affect my heterosexual marriage. I feel that I need to channel my inner sassy drag queen to say this next statement. Please add a snap for the benefit of those with visual learning needs. “Honey, the only way that would be true is if you are sucking dicks of guys you meet on “GRINDR.” The only way I could even remotely see this affecting any sort of heterosexual couples is if a gay married couple broke into someone’s home and redecorated the place. My third and my personal favorite from the stupidity Rolodex was once the ruling came down, people took their social networks and said they are moving to Canada. Well…..about that. Canada legalized gay marriage in 2005. I bet that has to be a kick in proverbial maple leafs. At least I am not a hypocrite when it comes to my beliefs. Somewhere right now, Justice Scalia is sitting around listening to “Everybody Hurts” by REM and “It’s Raining Men”. But speaking of hypocrites…. 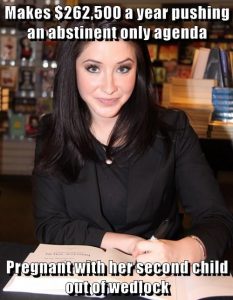 If the Confederate flag wasn’t enough to send you into a tizzy (and yes that is a technical term). If gay marriage being legalized wasn’t enough to get you to run out into the streets in a wife beater saying the world was coming to an end, I feel this may do it. Isn’t it funny that we are supposed to stand for our beliefs? We are supposed to be helping the future of America by showing the younger generations what not to do; Bristol Palin is just fucking the hell out of it. Apparently her legs are like the doors to a Wal-Mart on Black Friday. Think I am a little harsh? Well, I hate to tell you, I may not be harsh enough. Bristol Palin, you the face for not getting pregnant out of wedlock, gets pregnant when younger. We all make mistakes. I think that can be forgiven. She preaches about how waiting till you’re married is the right thing to do. She ends up meeting a wonderful guy; they end up engaged. A month ago, the engagement was called off. A week ago she announced that she is pregnant. Something smells fishy here. I may not be a gumshoe, but I do have my Where in the World is Carmen San Diego Jacket on. Something tells me she was inseminated by an Alien. Alright as farfetched as that is, I am not sure I could even get the Ancient Aliens guy to agree with that one. So the other idea is that she had an affair. Dun Dun Dun. She is one more stupid decision away from getting her own reality show on MTV. I will bet money with anyone that she marries a Duggar.