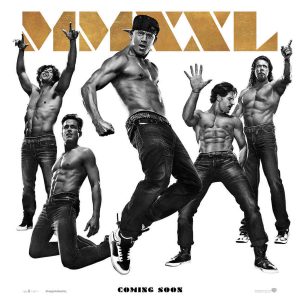 I am not sure about any of you, but this weekend I was able to catch some of the best looking fireworks a woman can see. I am not talking about the ones in the sky. I am talking about the ones that were on the big screen. I can’t suggest this enough, if you want to be thoroughly entertained for a couple of hours by guys who have abs that you can grate cheese on, this is worth it. I loved the first movie, but alas with many sequels I seem to be left wanting more. I did not feel this way with MMXXL. The second movie captured the fun campiness of the first film while still giving us some eye candy. The humor from all the characters was spot on. Channing Tatum has a very amazing sense of when to deliver a punchline in a joke. The entire cast brought their A game including the addition of Jada Pinkett Smith and Donald Glover (Childish Gambino). 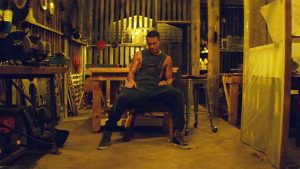 The story follows Mike as he has started his own furniture company. His girl said no to a marriage proposal that left him fleeing like he was missing something in his life. That is until one day, he receives a phone call from Tarzan (Kevin Nash) saying that Dallas was gone. Mike attends what he thinks is going to be a wake but ends up being a party. The idea of one last hurrah was thrown out. Mike somewhat starts to think about getting back in the game after a three-year hiatus. One night while working on a piece of furniture, Pony plays, and the rest is history. The gang starts the long journey to a convention in Myrtle Beach. Along the way, the guys talk about what songs they should be stripping too and meet some of the most interesting cast of characters you can meet south of the Mason-Dixon Line.

The movie may not have the deepest plot line of what is being presented in the theater today, but it does have a presence of fun that is lacking from a lot of movies. Magic Mike XXL is the perfect for the girl’s night out. Ladies, if you drag your man to go see it, he will enjoy it too, he just will not tell you.

Magic Mike XXL: Not a must see but definitely worth it.

Rebekah Paige is a very shy transwoman who also loves the spotlight. Confused? So is she. Beks is a 33 year old standup comic who is starting a brand new journey in a world that she already knows. She has a heart of gold and a mouth full of opinions. She is the type of girl you want to bring home to mom so mom can have a drinking buddy. You never going what is going in or coming out of her mouth.