First a little bit of a back story before we can attack these queens of botox. On Sunday night, the Miss America pageant took place and was broadcasted in many homes across this country. A contestant named Kelley Johnson, who proudly represented the state of Colorado did something a little different for her talent. No, she did not sing, dance, or, heaven forbid clog or twirl a baton that was on fire. Honestly, her talent was much more respectful than that. Miss Colorado wrote a monologue that she penned herself over being a nurse to patients with Alzheimer’s. She received a mixed bag of reviews on Twitter but taking 140 characters at heart is almost the same as walking into Wal-Mart with flesh color leggings. A person should just not do it. If you have not had the chance to see the monologue yourself, watch the video below. 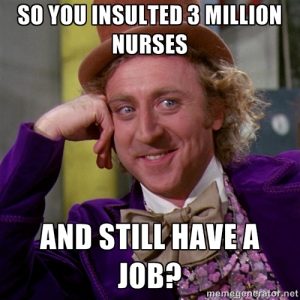 So the next day the women of The View decided to weigh on the monologue from the pageant. First off, I want to say that the women of The View have as much credibility as Donald Trump’s being great with money. We have one host that should have seen her career hitting rock bottom. Another host who has not been relevant since the movie Eddie. One woman I have never heard of, and another who kissed Barbra Walter’s ass so much that she left a permanent stain. So I guess that it comes to no surprise to anyone that what these women said was just plain idiotic. Out of the two main statements let’s start with the stethoscope comment. Joy Behar says, “Why was she wearing a doctor’s stethoscope?” I guess I missed the memo here. I didn’t know just Doctors were allowed to carry stethoscopes. I am starting to think the fame and some botox has made its way through the dense skull of Joy Behar. If there is one group of people you do not want to piss off, it is nurses. I feel that it was a huge mistake making the same group of people mad that will choose the size of the catheter when you go to the old folks home. Plus, I am surrounded by people in the medical profession who have their stethoscopes stolen by doctors on a regular basis. The other comment that was made was she was wearing a nurse’s costume. I am not aware that scrubs were a costume choice with the exception of Zach Braff. When I think nurse’s costume the first thing to come to mind is not the clothing that the profession wears each and every day as they help save lives. Actually, that is far from it, when I hear nurse’s costume, I think of the woman that believes that a nurse wears thigh highs and strips to “Bad Case of Loving You” by Robert Palmer.

But wait…..If you think the stupidity by The View ends there, you are sorely mistaken. 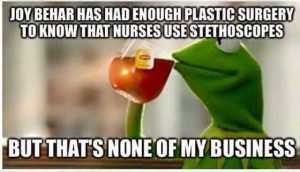 Joy Behar and the other one (Yes, I know her name is Michelle but quite frankly does it really matter.) decided to issue an apology to the nursing profession. It was the same apology that a child in 2nd grade would give so they did not have to miss recess. The words “I am sorry” did not come out of either one of their mouths but instead tried to backtrack by making more excuses than a Hillary Clinton email. Joy Behar said that all she had seen was a video of a woman dressed as a nurse giving a monologue. She had no idea that she was a nurse. I thought the first rule of comedy was to know your subject matter? Joy Behar is the equivalent of Carrot Top in the world of female comics. I think that if you ACTUALLY watched the video, one could ACTUALLY tell that she was a nurse. I feel that this is the equivalent of blaming the dog for a fart that you released. I think OJ might have delivered a more heartfelt apology than the women on The View. However, they have to keep going. Raven Symone, yes the same Raven that was on the Disney Channel, made a statement that people didn’t hear the entire conversation that was talked about on the show. If I am not mistaken, your visions should have shown that you are a dumbass for making that statement. I think everyone understood what was meant very clearly. 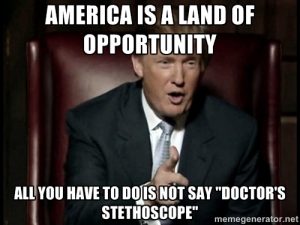 The women on The View are nothing more than a washed up version of the Plastics from Mean Girls or the Ashley’s from Recess. We are proud to stand with nurses all across the globe. Nurses are heroes. They rise early or have to work overnight in a highly stressful situation, a profession that is more stressful than sitting and complaining about others. We are taking a stand in boycotting the View and standing with nurses. Let’s just hope none of you need any sort of medical help, because all of your careers are already on life support.

And a follow-up, Johnson & Johnson and Eggland’s Best have pulled the plug on advertising during The View. Now if only Barbra Walter would pull the plug on the show itself.

And checkout the Facebook group Show Me Your Stethoscope and say thank you to the men and women of the medical profession. #nursesunite