To Whom It May Concern

To Whom It May Concern,

I wanted to take this time to discuss with all of you something that you may have heard in the past few days concerning TBK Magazine and things said about us. Earlier in 2016, we covered Mid-South Pride and met some amazing people at that event. It was at that time that we met a group from our local university. I for the sake of this letter, will not name them because they do not deserve any hate mail. The group as a whole is a fantastic bunch of students who deserve the world. During a meeting of theirs that we attended, a conversation was brought up with than their faculty advisor about doing a drag show in the Fall. It became a heated argument and one that was very uncomfortable to sit through. But the other staff member who was with me looked at me on the way home, and we both decided to whatever it took to help these students. We volunteered and partnered with them to put on a drag show to benefit student club. Some of you will remember and others will not, us discussing Queens of the Fall. When we volunteered, we said the main thing for the show is to make sure that it was off campus due to restrictions that were faced by doing the show on campus. And thus, we secured a venue for the show.

The show was something that we were very much behind the entire time, even going to be shelling out the $900 for the venue, a steep price for a company that is not making a dime. Money was not a concern had it ended right there. However, in the weeks leading up to the show, we received a few emails that were not pleasant. That were downright threats on the performers, the audience, the students, and the people helping out on the show. I have said this for years; we get threats sent to us. Most of the time, it is due to something that one of us has mentioned in an article or on one of our podcasts. It is the nature of the beast of being in the public eye. This was a little different. This was not just me, this was not my staff, because if that were the case, it would not have bothered me. But there was just more than me to think about with this situation. I want people to understand, and I want you to think rationally about this statement. More than likely it probably would not have happened, what if that one time we did not put in the proper security and something happened. That would be in my head for the rest of my life, and I just couldn’t do that. And if you are offended by what you about to read, these are the tame ones.

“FUCKING QUEERS RUN THIS TOWN AND THAT IS ABOUT TO CHANGE”

“If aids hadnt killed you i will”

“I have a bulet for everyqueer I see that night”

We were down to one security guard, and I knew that was not going to cut it for the venue. Due to this message: By any chance is your staff credentialed in security? Once we lost our credentialed security, I contacted the local police departments in the area, as well county offices. After having a couple of phone discussions, the cost of hiring security would be 25/hr and needed for four hours, and maybe 5. That would now bring the total to a whopping 1525-1650 for this show when it is all said and done. As for the threats, the emails were sent to a couple of the officers that did request to be part of the security for the show. And I do know the investigation is ongoing so I will not post screen shots of those messages.

And thus leads us to the biggest issue from all of this, postponing the show. It was a decision that was breaking my heart because we wanted to help these students out because we had grown to care and love for them over the span of putting this show together. I sat down with my staff and had a discussion as well as emailed the venue, and talked to the local authorities on what to do. The threats and not being able to provide the proper security due to financial reasons, led to a phone call on Wednesday night with someone I trusted. I told this person what our options would be moving forward, the words of the conversation that still ring in my ear constantly is that of “You need to worry about yourself too.” It came down to dipping into my personal account for the security. Those were the words she said to me. On Friday afternoon, I let the performers know that we were going to postpone the show to a later date.

Selling tickets for this show, we used a service called Eventbrite. An amazing service if you are running an event and want to sell tickets online. The ticket sales were strong but did start to falter after a certain date. We had a quite a few people asking for refunds before we postponed the show, some for safety, some for being out of town, and some just not being able to make it. It happens in the world of promoting shows. The decision to postpone the show was made, and I sent out an email to EVERYONE who purchased a ticket online asking if they wanted a refund or to hold their ticket and it would be redeemed for the new show. Needless to say, each person wanted a refund on their ticket. And I want to post Eventbrite’s policy on refunds. 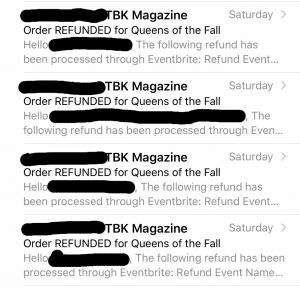 We were going to postpone the show until we were able to get our ducks in a row, that was until certain people started putting us under fire. The same people we were supposed to be helping, accused of us of not refunding tickets and pocketing the money ourselves. If there is one thing that will get at me more than anything, it’s being accused of stealing, especially from a cause that all of us believed in. Furthermore, the only people that put money into this show was TBK Magazine or The Buzz Kill Magazine, or whatever you want to call us. 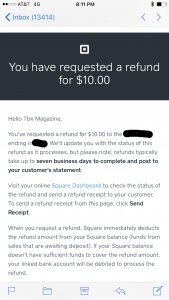 I am here to set that record straight. We did not take anyone’s money in the process of putting together this show, and anyone who has purchased tickets has received a refund, even the one purchase that came from Square. The only cash sales that I have on me was the 20 that came from a friend, and that 20 is still sitting in the envelope waiting for them to come pick it up. The other happens to be a dollar in quarters which is random. The rest sits in a manila envelope in their office on Campus.

This show meant the world to the staff of this magazine that was helping out with all the behind the scenes stuff. We did the legwork, the behind the scenes stuff that no one thinks of when they go to show. The decision to postpone was one of the hardest decisions I have ever made. A lot of bridges have burned, and relationships have been demolished. But I know at the end of the day, even if it was not the popular one, the right decision was made, and we will stand behind that.

CEO and Founder of TBK Magazine.

Finally, if you have any questions click on contact us in the menu bar and send me an email.