You Can’t Take The Sky From Me…..Firefly Reboot? 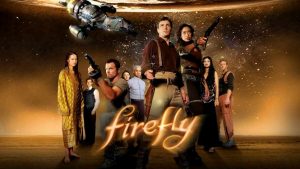 Be still my beating heart. Is the news true? Does the FOX network really want to bring back the cult favorite Firefly? Is it a possibility in the world that we live in? This is the news that we need to hear, but you tell me there is a catch. Of course, there is a catch. This would be like getting back together with an ex, there is always one thing. Joss Whedon has to be a part of the show! Well, you can’t have Firefly without Joss. And this is where the line comes to a screeching halt.

In a perfect world, Firefly wouldn’t have been cancelled to begin with. So, Fox decided to throw a bone to many of us Browncoats that want to see Firefly back, but do we. I for one would love to see more of the crew of Serenity doing what they do best, and what is that, being Big Damn Heroes. But… and before you decide to grab your pitch forks and burning sticks, hear me out. The thing that makes Firefly so special is the fact that the show only had one season. I have a feeling that if Fox were to bring the show back now, it would be the same issue as before. Nostalgia works, look at The Force Awakens. Due to having the original stars be part of it, it was able to give the fans of the originals something special that they were not able to feel with prequels. 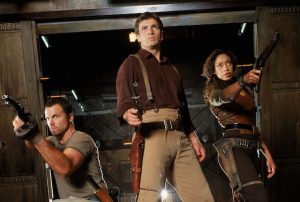 I wanted a second season of Firefly, but it will not have Book, or Wash. Those two were main components in making the original run work so well. And yes, you could go back and tell the story of what happened between the end of Firefly, and Serenity but we all know the outcome, and it’s too soon to bring up the feels concerning Wash. Firefly was special. FOX didn’t think so, but the fans did. And FOX being open to the idea scares me down to my inner nerd core. The show would be a shell of the original run. Think of it in terms of an athlete who plays football. They win a Super Bowl, they are on top of the world. And this person plays a few more seasons and has great games but age starts to finally catch up to them. Eventually, you won’t remember that Super Bowl win, you will remember the awful last few years where he should have retired. I feel if Firefly were to come back now, the original run would be forgotten and the new season would be what takes its place. The greatness of the show would fade into the background, and mediocrity would start to rise. And that does not sound like something from the mind of Joss Whedon. Firefly will always be one of the greatest Science Fiction shows to ever air on television and will always be shared with a new generation. If anything, Firefly is this generations New Hope.