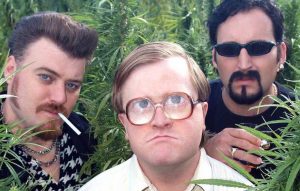 Comedy is a subjective thing. Different things are funny to different people and what might be a gut-buster to you, could completely fall on deaf ears to someone else. My own particular tastes in comedy are a never-ending series of ups and downs that wouldn’t really make sense to anyone but me. I’ll plow through some stupid stoner humor, British dry humor, super broad pratfalls and fart jokes and topical acerbic satire. If it makes me laugh, then bully for me. The only time I’m ever super picky about the comedic entertainment I indulge is standup comedy, but that’s another article for another time.

Regardless… things I think are hilarious are non-sensical and just plain boring to others. Never has this been more apparent to me than watching one of the funniest shows I’ve ever bore witness to with my wife the other night before bed. I was laughing hysterically (despite having watched the whole show all the way through multiple times) while she looked on in bewilderment and general confusion. She’s an extremely intelligent woman, but god bless her soul couldn’t understand why I was so amused. I tried explaining a few things to her but it was all for naught. She just wasn’t into it on the same level I was or at all for that matter. So it is this experience coupled with many of my own observations over the last week that have led to this article. The show I speak of is Trailer Park Boys… and it is truly deceptive in how perfect and hilarious it is.

I know that on the surface this show seems like a tough sell. A trio of ne’er do wells and small time criminals who live in a trailer park in Canada are always getting into extremely profane and increasingly over the top adventures. It’s almost always involving a get rich quick scheme or trying to get “one last score” before retiring from a life of petty crime. Did I mention that it almost never works out for them and almost every season ends with one or all of them in prison? The core Trio are what really sell you on this show. Julian is the smartest and most level headed of the Trio. More often than not, it’s his schemes and ideas that get the group closest to success. Ricky is the hot headed, not all there in the brain department, dope dealer who despite his extremely rough around the edges personality, is really the heart and extremely profane soul of the entire ensemble. Bubbles… is kind of like a mixture of the previous two with a shade of childlike naïveté you don’t find anywhere else in the cast. He’s not a saint by any stretch… but somehow he’s the one park resident who never really seems to get in trouble other than by associating with the other two. There are more characters and plenty of other personalities to behold, but it’s these core three people that really anchor all 11 seasons of craziness. 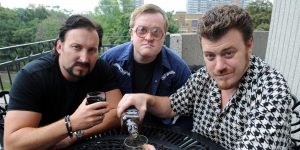 Again I can see the tough sell, but as the title of this piece suggests, beyond the surface level drug based and various types of sophomoric humor, this show is actually quite genius in pulling you in.  I’m sure the average viewer might see a trailer or read a premise and scoff at what they might be getting themselves into, but trust me there’s way more under the surface here than you might initially realize. The deceptive aspect kind of goes hand in hand with the genius of the comedy. This was the “faux documentary” style of comedy television a few years before The Office and Parks & Recreation blasted into the scene making that style more mainstream.

I’ve watched all 11 seasons (each season is about 8-10 episodes and 30 minutes each… so easy watch) multiple times over and every single time I find something new to discover or laugh just as hard if not harder. The best kind of comedy doesn’t deliver the entire meal on your first serving. The kind of entertainment that endures well past its debut is the kind you have to peel back layer by layer. The first time you watch this, you just kind of sit back and laugh at the lowbrow humor and soak it all in without much of a deep analysis. You’ll enjoy it on the first run and once you’re done,  you won’t feel disappointed. It’s a slightly more profane take on a Kevin Smith film through a Canadian lens. The best thing about it is that the easy Canadian jokes to make go largely unheard (unlike Smiths latest film Yoga Hosers which got kind of lost in the easy pot shots and puns). 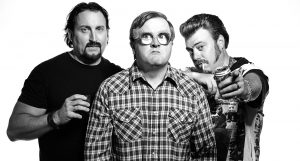 Once you make it past your first viewing, and start graduating onto subsequent viewings is when the actual genius starts to shine through in a big bad way. You’re aware of what you’re getting and you’re allowed to really delve into the characters and their relationships more deeply. These goofballs and miscreants really do care about each other in their own misguided ways. Every mistake and misstep ultimately serves the larger plan of bettering their lives beyond living in a shithole trailer park. The laughs keep coming and even more ferociously so on the 2nd and 3rd viewings because now you have a connection to the people on screen and you become invested in their lives. So much of populist entertainment these days trades in these larger than life personalities that are hard to invest in because it’s more about the gags and pratfalls than the interpersonal stories being told. The residents of Sunnyvale trailer park aren’t caricatures and archetypes… but actual characters with rich thematic depth to them.

I know you’re probably thinking I’m completely out of my mind trying to hold a bunch of drug dealers and criminals on a pedestal of comedic excellence, but don’t just dismiss it based on the surface level flavor of all the cuss words and weed based humor. These characters have deep affection for each other and it’s kind of amazing to see this demented but loving family of people stumble their way through the shitty life they’ve been handed. Even the more villainous type characters aren’t outright villains but tragically flawed people who’ve lost their way and are often redeemed in the end.

Trailer Park Boys is a deeply funny and enriching experience that is equal parts lowbrow humor and scathing satirical statement on the lengths that people will go to try and give themselves and their loved ones a better life beyond the cards that they’ve been dealt. While more of their “schemes” and “plans” are greasy and underhanded than not… there’s something to admire in watching a collection of wayward souls travel their way through life just trying to get by. Come for the dick and fart jokes and crazy fucked up humor… but stay for the very well defined and rich thematic characters and relationships. I promise you won’t be disappointed.