I am a huge sports fan. There is something about the thrill of the win and the agony of defeat that gets my blood going. It does not matter if it is a team sport, or an individual performance, I will be on the edge of my seat wanting to see more. Hell, while waiting for the announcement of the Doctor on BBC 1, I was able to get into the men’s final at Wimbledon. So much so, that my neighbors may somewhat hate me now because it was 9 AM on a Sunday. But this one time, I can honestly say that I am appalled by sports. I have been turned away from something that is going to a massive moment in the history of sports and pop culture, to the point that I am just embarrassed.

I have a feeling you know where this is going. I am not the biggest fan of MMA, but I will go out of my way to watch certain fighters. Ronda Rousey and the Notorious Connor McGregor being two that have peaked my interest. There are a few heavyweights too, but I am not sure of their names. And the same can be said for boxing, occasionally if there is nothing on, I will watch a boxing match. The last one I finished in its entirety was the Mayweather Vs Pacquiao fight a few years ago. So, when the announcement came that Mayweather was going to come out of retirement to face off against McGregor, it was like Christmas morning for sports fans, myself included. I was excited. I was eager to see what two of the best fighters in their respective combat sport, will be able to do against each other. And then last week happened, and all those feelings of excitement, turned to disappointment, and then to embarrassment. 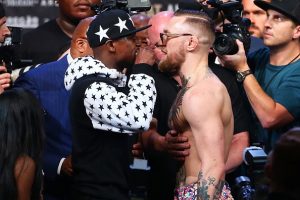 McGregor and Mayweather decided that having press conference in four different cities to hype the fight was going to be a great idea, but in my eyes, it hurt the entire process. And sure, there were those face to face stare downs between the two which heightened drama. Before I continue I need to make one thing clear, I love trash talk. Especially, when trash talk is backed up. One of the main reasons that I will always love college sports, is because of the trash talking during rivalry weeks. With that being said, the trash talk between McGregor and Mayweather was nothing more than a really bad episode of the old MTV Show Yo’ Mama hosted by Wilmer Valderama. It was juvenile, and that is putting it lightly. And this is coming from someone who enjoys pro wrestling, so I know cutting a promo is an artform. And to a point McGregor had more good moments than bad. But damn, during the London presser, the two fighters dropped the word fuck at least 50 times in the span of 15 minutes. I curse, I swear like a damn sailor, but honestly even I became uncomfortable with as many times as the two fighters dropped the word. This is not a fight, it is a three-ring circus. Where is PETA to shut down a circus when you need them.

These two men are going to make hundreds of millions of dollars on this fight. And it’s going to be bought many people around the world. In fact, it may be the highest selling Pay Per View of all time, but that does not change the fact that both fighters make a joke of what their artforms. Muhammad Ali could trash talk, and made it something that you wanted to hear. If I wanted to hear grown adults yelling each other while cursing and constantly repeating themselves, I would relive the 2016 presidential election. There is still an entire month to go, so there is time to bring me back around. But as of right now, my $100 dollars is going to something else on that night.