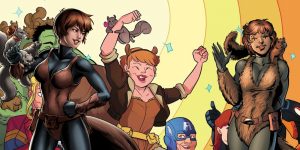 Squirrel Girl is among one of the most fun comic characters to grace the pages of Marvel. With the motto of Eat Nuts and Kick Butts, how can you not like her? Plus, with our mascot being a squirrel, the love was just kismet. However, with that being said, Squirrel Girl has not graced us on the small screen or big screen just yet. Until earlier this week it was announced that the crime fighting girl who is also a squirrel, will be making her debut in the Marvel Universe. Small Screen though. Freeform which was formerly ABC Family will have their own Marvel show called, New Warriors. I am excited for this show, but with one issue. The show is on Freeform. If you are not aware with Freeform, god bless you. The network is responsible for giving us shows like The Secret Life of the American Teenager and Switched at Birth. So, I feel there has to be some trepidation moving forward with this project. 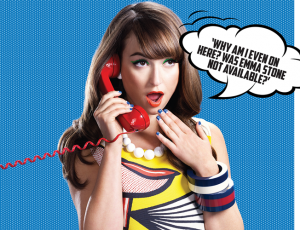 Squirrel Girl being apart of the cast in this show may make it a must see. But it depends on who is playing her, and that was also announced this week. The woman who will be donning the Tail is Milana Vayntrub from This is Us. I can honestly say that I am not familiar with this show at all. But I knew in my mind that I had seen her before. And it hit me. She is Lily from the AT&T ads, not to mention in a lot of College Humor videos. I have to say without a shadow of a doubt for a televised version of Doreen Greene; she may be perfect in the role. Just in those ads alone, her comic timing was wonderful with a hint of sarcasm, and anyone who reads the comics know she will do the character justice.

This is supposed to take place after Civil War, so hopefully, it will be more towards the lighthearted side that Marvel is great at showing. Will New Warriors be able to last more than one season, can it survive being on a network for hokey type shows. Only time will tell, but we will have a review of the first episode once it airs in 2018.