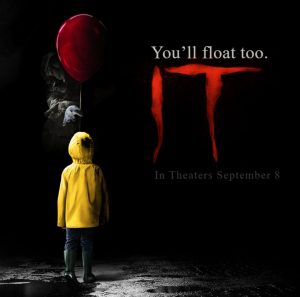 I went into this having grown up with the original miniseries so I was biased. I’m a Tim Curry fan from his Rocky Horror Picture Show to his time on Roseanne as a con-man and all the in-between and beyond so Skarsgard had some big clown shoes to fill for me, but I have to say, he did a pretty good job at it!

At first, I wasn’t too thrilled that Hollywood was messing with another cult classic. I had that deep seeded loathing of my childhood being messed with and fear of it being messed up, but this time I was pleasantly surprised. From the character casting to the CGI, this was in no way a disgrace or distasteful retelling of the original film.

The casting was superb, I don’t use that word often, but it’s exactly what is needed when describing the cast. I’m familiar with Skarsgard because I’m a fan of the show on Netflix Hemlock Grove. I was shaking my head when I first heard of the casting, but I was willing to give him a shot knowing he was so good on the other show. His portrayal is best described as an ode to Tim Curry’s rendition of the character mixed with Jared Leto’s Joker. It’s that beautiful mixture of creepy and dark that makes a horror movie truly horrifying–in a delightful way that captures me. What Mr. Skarsgard does with his voice and body adds a true creepiness to his scenes with the children. That with the CGI makes for truly fearful scenes and ‘holy sh**’ moments. There is no doubt in my mind that many people were left shaken when the end came.

I can’t mention casting without spotlighting along with Bill Skarsgard young actor Finn Wolfhard, known to most as Mike from Stranger Things. He is absolutely hilarious. My favorite scene with him performing is with him in the background. He stole the attention and focus in a scene from an alleyway. In the background of the scene, there is a marching band going by and we see him with a band member’s instrument. There’s a bit of a struggle before he releases it to the musician. The entire scene had me cracking up. He’s an incredibly talented young man and so perfect for the part of Richie Tozier. He has hands down, the best line of the movie as well. Richie to Bill: “You punched me, made me walk through sh***y water, dragged me through a crack house and now I’m gonna have to kill this f***ing clown.”

This is definitely going to be a movie I’m going to buy when it comes out and watch it several times. I really hope they make a follow-up, an IT Too with the adult versions of the children coming back as we know from the source material and mini-series. I do hope, if they make a second film installment, that they talk about what happened what happens more after they beat It and not leave the gap from childhood to adulthood empty. I find those sorts of things interesting and help me smoothly flow from a first installment into a second, knowing what happened in-between. I’m curious to see what they’d do.