Stranger Things Picked Up For a Third Season 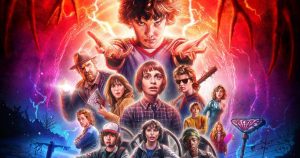 It is official. Break out the set of Christmas Lights, make sure the Eggo Waffles are accessible, and remember the power of eleven because Netflix has renewed Stranger Things for a third season. The Duffer Brothers trip into a horror filled 80s has been critically acclaimed by a lot of people. The show did kind of come out of nowhere and now is a pop culture phenomenon. However, is it possible the show is being put out to the masses to quickly. One of the things that seem to plague the streaming originals is that seasons need to be pumped out more quickly to the fans. Season two falls under this umbrella, but season three can make up for it. Netflix did not release a time frame on when the show is coming back, but rumors do say that it will be set two years in the future to account for the growing up of the children. I know I am not alone when saying this, as long as Steve is there, I am in.