Jimmy Garoppolo Is The Highest Paid QB In Football and... 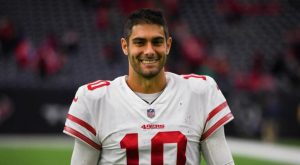 Am I the only one questioning the deal that the 49ers gave Jimmy Garoppolo? If you have been living under a sports rock and do not know what happened, I will gladly fill you in. Jimmy Garoppolo was the backup quarterback in New England, a job that any player with no ambition would ever want, insert Ryan Mallet here. During the season, the Patriots traded Garoppolo to the 49ers for a second-round draft pick, and the chance to mine for gold “In Them Darn Hills.” The season ended with questions of what the next move for the 49ers would be, what no one expected was the deal put in place for the former back up of Tom Brady.

Jimmy Garoppolo is going to straight to the bank with a five year 137.5 million dollar contract, making him the highest paid QB in the league. So, that leaves the question, does he deserve this kind of payday. And honestly, the writing on the wall tells me, No. Matt Cassel is the perfect example of what a QB can do in the Patriots system. He looked terrific in that system, and even after Brady went down to injury, the Pats somehow made the playoffs. Cassel secured himself a hell of a deal with the KC Chiefs, where he would ultimately lose that job to Brady Quinn. Remember Brady Quinn? The only person who does is his Mom, and that one Notre Dame fan who believes they should have won the National Title.

Cassel’s first year in Kansas City was plagued with injuries and even showed that he went 4-11 in starts, Garoppolo has matched that many wins in his first five games in the city by the bay. I am not sure the last five games of the season can be a measuring stick of what this guy can do on the field. The final game against the Rams was tainted due to the Rams resting almost everyone. So, that is not a fair judge. They did beat one of the best defenses in the league in Jacksonville and defeated the playoff limping in Titans. They were able to barely get past the Bears and beat the terrible Texans. I am not saying he didn’t deserve a pay raise, but I am not sure making him the highest paid in the league makes any sense. In perspective, he is making more than Tom Brady, who has won 5 Super Bowls.

I hope this deal works out for the 49ers, but something tells me this may be put down on the same sheet of paper as Joe Flacco becoming the highest paid QB. Sure, he won a Super Bowl, but all anyone remembers is that defense. I hope Garoppolo can prove me wrong. Only time will be able to tell, but in the meantime, we can all celebrate the Patriots not winning the Super Bowl.