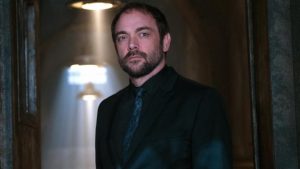 I spent day one of Kansas City Planet Comicon just taking everything in. On Saturday, I decided that it was time to get down to business. With the help of Planet Comicon’s handy app (and my husband’s navigational skills) we located Mark Sheppard’s panel. I have been a fan of Supernatural from the beginning, so I did not want to miss this panel. The conference room filled quickly, and I realized that I was not the only excited to be there. This show has been crazy successfully with thirteen seasons under its belts so far. It premiered in 2005 and has a cult following. My oldest son was a mere one-year old baby when the show began and now both my sons are fans. While the end is near, we already know that a spinoff is in the works. Sadly, Mark Sheppard’s character died in the 2017 season of Supernatural, so this was panel was the place to be to get the details. Sheppard’s character on Supernatural is Crowley. Crowley, the King of Hell and a crossroads demon, is introduced into the series in 2009. This character is a very complex antihero. Mark Sheppard explained that when he first portrayed Crowley, he was signed on as a guest star. He had a recurring role for many years. Sheppard continued to act in several other television shows while filming Supernatural. Much to his surprise, Sheppard was signed on as a regular cast member in the tenth season. At that time, he was required to stop acting in other projects and concentrate solely on Supernatural. Sheppard seems to have enjoyed his time on the show. The way he reflected on the other primary actors gave me the impression that they shared good rapport. As a fan, this makes me happy. I like the idea that my characters are friends on-screen and off-screen alike. Silly, I know, but still nice. Sheppard was invested in his character and wanted continuity. It bothered him when there was plot holes and he was honest in pointing out to us there are plenty. As fans of the show will know, Crowley died in the 2017 season after a fight with Lucifer. Crowley’s vessel is killed, and his demon essence hitches a ride on a rat. The writers did not intend for season thirteen to be Crowley’s finale. However, Sheppard did not like the direction of this character. So, he requested that Crowley be killed for real this time. The character returned with his good-as-new vessel and sacrificed himself to save Dean and, in all honesty, probably the whole world. Not too bad for the King of Hell.

Of course, Supernatural is not the only thing that Mark Sheppard has acted in. He has been in a remarkable number of shows that I love. He has had roles in Battlestar Galactica, Firefly, Dollhouse, Charmed, Doctor Who, The X-Files, Leverage, Warehouse 13, Star Trek: Voyager, and so many more. I could sit here all day listing his filmography. Seeing him in shows is almost like a hidden Easter egg. Or like finding Stan Lee in a Marvel movie. It is a wonderful surprise. He mentions that he has been lucky to be appreciated by such an intelligent audience as the nerd community. It has made his success possible.

While taking questions, some of his words stick with me. An aspiring actress asks for tips for success. He tells her that a person cannot act as a job. It is not a profession. If a person goes into acting as a job, they will fail. They will give up. Acting is a passion. It is something a person feels in their soul. The rest will follow. If person succeeds, it’s important to give back. It is the people who love the art that make it possible. Being with fans and doing conventions is the best feeling in the world.