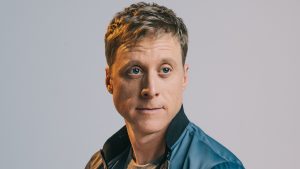 I want to get this out of the way, if no one has claimed Alan Tudyk as their spirit animal, I would like to throw my hat into that ring… I am glad we are all on the same page. Sunday, Feb, 18th, at Planet Comicon, the voice of K2-SO in Rogue One, our favorite Dodgeball playing pirate, the voice of our favorite cartoon chicken from a Disney film, and the pilot in all of our hearts, Alan Tudyk graced the stage for his panel. And without a shadow of a doubt, he did not disappoint. He was entertaining for the entire hour. And if it was at all possible I could listen to him tell stories all day long, and never get tired of it. Granted, every story may take place at Nathan Fillion’s house, but I feel that should be the beginning of every good story.

One of the biggest highlights of the entire panel was hearing Alan’s story of how he became the voice of K2-SO. He was contacted by the director of Rogue One to discuss the character of the android. It came across as a joke that was genuine. He made a joke about how he would be helping out with the character, and not actually voicing the droid. That was until, he was invited to Star Wars Days at Disney. While the festivities were happening below him, he found out that he was cast as the voice of the droid. In which, he did not believe until calling his agent. The one thing that we as the audience were able to take away from this story was how excited Alan was to voice a character in the Star Wars Universe. He seemed genuine with his responses about being part of the franchise.

Questions were asked to Alan that involved how was he able to get in character to become the chicken in Moana, in which he responded, “Living in a coop.” Another question was asked about his cult classic movie Tucker & Dale Vs Evil. The question involved his favorite scene. He discussed the woodchipper scene as being one of his favorites to shoot because of how crazy it was. If you have not seen that movie, you owe it to yourself. He was questioned about being a bad guy in the BBC America show Dirk Gently. However, the crowd turned on one of the questioners, when he brought up the death of Wash. No matter how long it has been, it will always be too soon to discuss his death. The question asked involved how could Wash come back to the show if there would ever be a reboot. And Alan gave this scenario about Wash and Zoe running naked through tall grass, while the grass is kicking both of their asses.

One nice touch that Alan does when he is conducting a panel, is that he will hand out a prize autographed by him to the person asking the question. Some of the epic things he handed out was the key to his hotel room after he checked out, dinosaur stickers, a cookie (Yes, he signed a cookie.), comic books (That he helped write!), and even a shower cap. He even signed a bag and gave it to the moderator Clare Kramer which was a moment.

If you are going to a convention, and Alan Tudyk is a guest, do yourself a favor! Make sure you know where and when the panel is going to be and get there as soon as possible. You will not regret it at all. Alan Tudyk is a National Treasure, and we do not need Nicholas Cage to see that.