A Decade Later And I still Remember Kansas Winning The... 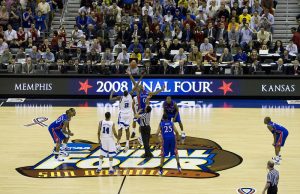 It is the most wonderful time of the year! And no, we are not starting our Christmas coverage early. No, today begins the NCAA Tournament. If you are a sports fan, this is one of the best things in the world. The drama, the suspense. The idea of a small school possibly reaching the Final Four. However, in my case, that idea is a joke. In every sport, I root for the underdogs. I still to this day will argue that Boise State should have been the Football National Champions in 2007. So, when I tell people that I am a Kansas Jayhawks fan, they give me a look as if farted wearing white shorts. And I get it. They are not traditionally the underdog. But, the first college basketball game I ever viewed was a Kansas game. I became hooked with the team from that very second, at the time I was just ten years old. I only knew of the NBA, but I was more of a baseball fan. But that has nothing to do with this story, what this story is about… The night Kansas won the National title in 2008.

Sports fans are superstitious. And I am one of those people. Since the 2004 tournament, I would wear the same pair of pants or shorts and shirt for each game. Before you start to say EWWWWW, I would only wear them for the games. But that is not all. I would drink the same beverage from the same glass during each game. At that point, it was a travel coffee mug with Dale Earnhardt Jr on it. I am not sure why my ex had it, but she did. I take that back; she could field dress a deer, a skill that I knew I did not need to possess. So, I strike my question from the record. And each time it was a cup of coffee with French Vanilla creamer. Each damn game, cup after cup. If it had been booze, I would have been wasted till about 33 minutes ago. A game would start, and there I was in my ECW T-shirt and shorts that were about three sizes too big because they came from my best friend. And previously to 2008, I watched my team suffer the agony of defeat. The 2002 Final Four and the 2003 National Championship are at the top of the list. To this day, I still can’t stand Juan Dixon or Carmelo Anthony.

This is where the story gets a tad bizarre. April 7th, 2008 was the National Championship game. Two number one seeds were meeting for the title. Across the court from my Jayhawks, the University of Memphis led by a medical insurer’s worst nightmare, Derrick Rose. The game starts at 8 PM. I was drinking coffee at 8 PM, at that moment I knew I had sealed the deal that I would eventually turn into my mother. ECW shirt on, shorts on, I was glad it was the last game because damn, they smelled awful. It is just me in the living room, roommate and ex had not made it home from work yet. No one could hear the screaming of my 23-year-old self. I take that back. My neighbor at the time was my sophomore English teacher. I bet to this day; he thought I was cheating on my ex with all the noises I was making. I would scream “YES” at the top of my lungs or get angry where I would just release a noise in the wild. If anything, I possibly may have sounded like a mating documentary on the Discovery Channel. Kansas is up at the half 33-28. It was a great first half of basketball. I was feeling great. I called my mother. My mother passed away in 2013, but she was just as passionate about Kansas Basketball as I was. She did not know much about technology. Instead of getting me to print her a bracket, she would write down each game to keep up with it. But at the beginning of the tournament, she looked at me to say “Kansas was going to win it all.” The halftime call was her still telling me the same thing. You could hear the excitement in her voice. This woman may have been 80 pounds soaking wet, but you could not keep her away from the television.

During the half, my ex and roommate came home. As they smelled like fried chicken which made me a tad hungry, but I was not eating till this game was over. My ex heads to the kitchen to begin to cook dinner because my stubborn ass was preoccupied. She was sitting with me in the living room when the second half started. Memphis took the lead. I was frustrated. She could tell. I went from happy to yelling at the television as if I were a muppet of an old man in the balcony of a theater. She went back to cooking, and Kansas started inching back. I am not proud of what I am about to say happened, but it happened which the two of them gave me hell for months after that game. But it was worth it. I asked her to watch the game from the doorway of the kitchen. If looks could kill, I would have been that dude in Scanners. But, she did. She was a sports fan. There is always an underlying understanding among sports fans that if your team is playing for a championship, it becomes the most significant thing in life.

I will never forget what happened. Memphis was up 60-51 with 2 minutes in the game. Hope started to fade away. My mother called me during a commercial that they were still going to win it. She must have known that my feeling went from excited to pure panic. Kansas started to foul. All Memphis had to do was knock down the free throws, and somehow, they just kept missing. Chalmers hit a couple of free throws, and Darrel Arthur knocked down a basket to make it 62-60. Kansas had to foul. They fouled Derrick Rose with 10.8 seconds on the clock. A one-possession game. Rose needed to hit both free throws for Memphis to be the National Champions, especially since Kansas used their last time out to ice the shooter. Rose steps up to the line, Jim Nantz is talking, but the only thing I can hear is the silence. My ex watched from the doorway of our kitchen, the coffee in my hand was spilling a little on me due to the nervous shaking I started to experience. Rose hits both free throws; it would be over. The first shot is up. It looks good. It looked like it was going to go in, and somehow the ball bounced in the rim and popped back out. “Holy Shit,” was the only thing I was able to get out of my mouth. Kansas fans are cheering, Memphis fans were kind of silent with the first shot being a miss. Rose steps to the line for the second shot. I know that I am out of shape from just the suspense of this game. If I ever develop a heart condition, I can honestly blame two things in this life. The first being the Royals winning the World Series in 2015, the second being the 2008 National Championship game. The ball is in the air, and it is good.

The next 10.8 seconds of sports have been grained into my mind for ten years. I do not remember some of the things I learned in history, the only thing from math I remember is the Pythagorean Theorem, but for some reason, this moment is something that I will never forget. The ball goes into the basket. Kansas inbounds, and Jim Nantz with the call. 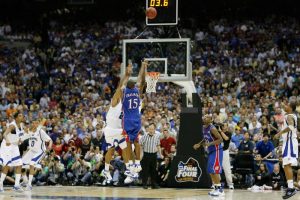 “Kansas has only made two threes on the night. They must make one here to extend the game. Collins driving, almost lost the handle. Chalmers for the tie! HE GOT IT, WITH TWO SECONDS.”

That was off the top of my head. Even writing it out, gave me chills. The game went into overtime. I am hysterical at this point. And no number of drugs was going to fix that from happening. I have loaded myself up with coffee; I was wired. The game goes into overtime where eventually, The Kansas Jayhawks would cut down the net. My mother called me after the game, and we were both crying on the phone. I ran all over my apartment as if I had won the championship. It was a moment that is etched in time for me. 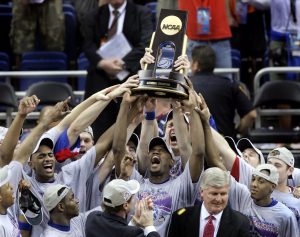 Today embarks a brand-new tournament, and I will go through the same ritual this year. Coffee, wrestling shirt, basketball shorts. But, that was one moment for myself. Many other fans across the nation have experienced the agony of defeat, the thrill of the upset, and cutting down the nets. Sports brings us together, and during the next three-week journey, we will all be watching. We will talk about each upset, watch our brackets become busted, and enjoy basketball. The NCAA Tournament is always a different story each time. But it is one that I am not going to miss.