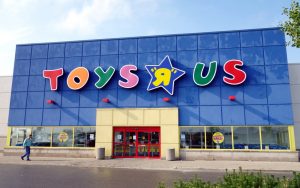 Remember as a kid the Toys R Us jingle? ‘I don’t want to grow up; I’m a Toys R Us Kid!” The time to grow up has arrived. As of a few hours ago, the toy giant said that they would close all 800 stores as reported on by the BBC and Washington Post. The news comes as a heartbreak as one of the staples of shopping seems to be fading away from the spotlight.

Toys R Us has been a staple of a lot of childhoods. We were able to run through the isles hitting multiple buttons and playing with anything that would make noise. As well as finding the action figures and dolls that were not carried by one of the huge box stores such as WalMart or Target. The company has struggled to find a way to pay down the 8 billion that they owe. And a lot of people will blame the notion of the internet with sites like Amazon causing the problem, but in fact, for the major toy giant, it goes much deeper than that. If you are running a business, the idea is to make money and turn a profit. However, since 2005 the toy company just kept piling debt on top of debt. And to add the company did not worry about e-commerce until last year, Toys R Us showed up very late to the party, in fact, they may have shown up to an empty house with Radio Shack. Even as late as December, it was noted that the executives of Toy R Us would be in line to get bonuses and incentives which just seems wrong. As of this writing, 33,000 people will be without a job in the coming months which is the most significant tragedy in this story.

As for the memory of Toys R Us, people are going to look back with vivid memories of getting their first toy from their favorite show. Toy stores have started to become a thing of the past, which began with the demise of KB Toys in 2009. Toy R Us will be liquidating their inventory which means those sales will begin soon, but how will the toy industry react? Only time will tell. It’s sad that the last chapter of the Toy R Us legacy will be Chapter 11.