Rick Moranis Will Be Dark Helmet on ABC’s The Goldbergs 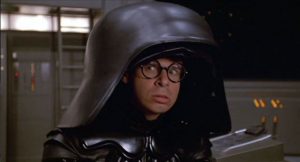 In 1997, actor Rick Moranis took a hiatus from the world of Hollywood to raise his children. But the long break seems to be coming to an end, sort of. This week on ABC’s The Goldbergs’, Rick Moranis will be voicing the very character that may have launched him to pop culture lore. Rick Moranis will be portraying Dark Helmet from the cult classic Spaceballs. Adam F. Goldberg, the show’s creator, had this to say about Rick Moranis:

“I truly think Rick Moranis gave the most underrated and brilliant comedic performance in any ‘80s movie as Dark Helmet,” I’ve been a lifelong fan of his work and became obsessed with having him reprise the role on my show. As an added bonus, maybe this even gets Spaceballs back in the conversation, and I can get my dream of helping make a sequel!”

Honestly, this is big news in the world of entertainment. Moranis, who is also well known for Louis in the Ghostbusters franchise, turned down a cameo in the new incarnation of the film. Adding to that is the popularity of The Goldbergs’, which has to be one of the best sitcoms of the last 15 years. Will this open the door for more? Only time will tell, but a Spaceballs sequel needs to happen ASAP!