A 35th Anniversary Ghostbusters Fan Fest Will Take Place in... 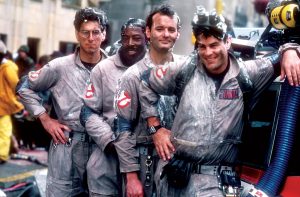 On this day 34 years ago, a movie franchise was born that changed the very foundation of how some of us view ghost hunting. The movie in question is The Ghostbusters!!! And in huge news from the world of conventions, the 35th Anniversary of the blockbuster film is going to be something amazing. Sony Pictures Studio will be teaming up Ghost Corps and Wizard World (Yes, the traveling comic convention company) to throw Ghostbusters Fan Fest. The event will take place on the famous Sony Studio Pictures lot in Culver City California on June 8th and 9th, 2019.

Ghostbusters Fan Fest presented by Wizard World will be the ultimate celebration of the film, which starred Bill Murray, Dan Aykroyd, Sigourney Weaver, Harold Ramis, Rick Moranis, and Ernie Hudson and was directed by Ivan Reitman and written by Dan Aykroyd and Harold Ramis. For the 35th anniversary, fans will participate in exclusive panels, meet the Ghostbusters creators, talent and crew and experience Ghostbusters augmented reality and virtual reality games.

If you are a fan of the franchise, this is going to be the place to be in 2019. More details will be released in the coming months.