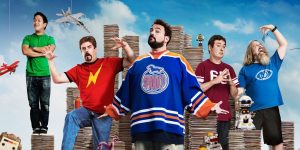 After the 96 episodes and seven seasons on the small screen, Comic Book Men was canceled by AMC. Kevin Smith broke the news early Monday morning that the network would not be picked up by the network for its 8th season. Comic Book Men followed the happening of Jay and Silent Bob’s Secret Stash in Red Bank, New Jersey. (Bucket List location for me.) During the run of the show, it was said that it was Pawn Stars for the geek culture. Vintage toys and comics would come through the door causing Walt, Mike, Ming, and Bryan to straight up Nerdgasm all over the place. Not to mention, the countless celebrities asking for toys to walk through the door.

After 96 episodes, the @ComicBookMenAMC are now the Cancelled Book Men. On a new #SModcast, hear Walt, Bry, Ming, Mike & I hold a Viking funeral for our @AMC_TV show and reminisce about the happy highlights of seven seasons! With big @TellEmSteveDave news: https://t.co/C5HSs6H2F1 https://t.co/Ij6Rf9Suh8

During the episode of SMODCAST in which the group talks about the cancellation, Kevin Smith says: “When you got a TV show, you live in fear of the moment that our little TV show just faced. Comic Book Men — our series that has been on AMC for seven seasons, 96 episodes, shot at Jay and Silent Bob’s Secret Stash in Red Bank, New Jersey, starring Walter, Bryan, Ming, and Mike, and occasionally myself, and a host of people that came through the doors from the world of comic books, comic book media, movies, TV, pop culture in general, a celebration of all things geek, a show that, when it aired, we all felt like, ‘Oh, lord, the reviews are so bad, it will never run past this one run of six episodes,’ or whatever it was, and yet, wound up going seven seasons — the little show that could has finally… couldn’t. [Laughs] Unfortunately. AMC let me know they won’t be renewing Comic Book Men for an eighth season.” 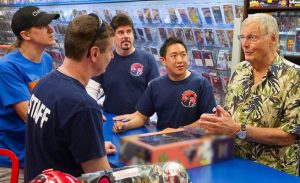 AMC is citing bad ratings for the cancellation, but I am not sure what the network was hoping to get from a show that aired at 11 PM on a Sunday. It would be like working in a video store and asking to borrow a friend’s car to go rent a movie from a good video store. It doesn’t make sense. The thing that makes me somewhat uneasy is that AMC may be wanting to distance themselves from the entire geek culture. The network went on note saying that they would like to do more drama. But is that the case?

Will there be a grassroots campaign to bring back a video version of Comic Book Men? The answer is maybe. Kevin Smith is one of the most popular Podcasters on the internet. He already has the platform to possibly dive into doing his own thing. Or will a possible streaming service pick up the show? Could we see Comic Book Men on Netflix, Hulu, Prime, or somewhere else? Only time will tell, but it was a fantastic run, and one show that we will miss greatly.