Disney Gives Fox 71.3 Billion Reasons Why They Should Take... 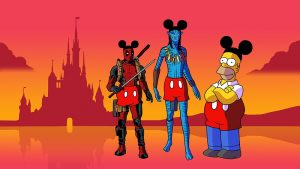 The battle for Fox may be over. Earlier today the company accepted the bid from the House of Mouse to purchase 20th Century Fox for 71.3 Billion Dollars and Stock Options. Somewhere Dr. Evil just did the finger thing. The acceptance of the bid now means that the ball again is in Comcast’s court. Earlier Disney offered 54 Billion to acquire Fox but was outbid by Comcast at 65 Billion. From the outside looking in on this, I am pretty sure Disney is looking at Marvel as the reason for upping the bid.

Disney is looking to mostly get the rights to the movie studio which right now owns Fantastic Four, which is one franchise Marvel has been after for years. It just seems that Fox has not been able to get the franchise correct in the three attempts the studio has made. Beside the abysmal Fantastic Four movies, Fox was also the studio behind The X-Men franchise and most recently Deadpool. The purchase could open up the notion of seeing The X-Men as apart of the Avengers franchise or the mildly popular X-Men vs The Avengers movies based off the comic books. But more importantly introducing Deadpool with the established characters could be something that fans are clamoring for with the deal. Deadpool Kills the Marvel Universe could be one of the highest grossing comic book films of all time.

However, Disney would also be in control of some of our favorite fandoms. Think about it! A ride devoted to the Alien series at Disney Theme Parks, a section devoted to the history of the Simpsons, and maybe even a second season of Firefly!  A guy can dream…

Disney would also be in charge of FX, The Fox Regional Sports Networks, and National Geographic. But, Rupert Murdoch would still have control over Fox News and The Fox Sports National Channels. Fox does have a shareholders meeting happening soon, once that does take place, we should know without a doubt who will own 20th Century Fox, but the House of Mouse may have won with simple layup.