I Stand With Kelly Marie Tran 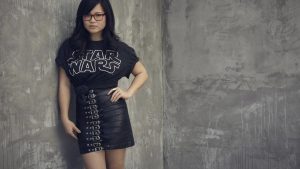 Ahh, the internet. Without you, we would not know about the greatness of Grumpy Cat, the dramatic chipmunk, or the “Leave Britney Alone” guy. One of the things that I have fallen in love with the internet is being able to find people who are part of the same fandoms as me. I love getting on a page dedicated to The Office and discussing whether or not Toby is the Scranton Strangler. It is nice being able to find people that enjoy the same things. However, in our little world of geek culture, things seem to be taking a turn for the dark side. Those discussions filled with debate have been replaced by people being complete numpties. 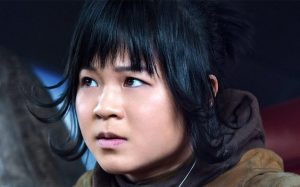 The latest in a long line of bull shit by fandoms, the way Kelly Marie Tran has been treated. The actress deleted her Instagram due to Star Wars fanboys sithing in their pants with hatred. A lot of this comes from the reaction to The Last Jedi. In the second installment of the third trilogy, Kelly plays Rose Tico a maintenance worker who serves the resistance. After the death of her sister, Rose joins Finn in the film. And it was in that moment that Star Wars fans hated this character. Hating a character is one thing, we all remember Jar Jar Binks. But the problem comes from these same fans attacking the actress on her pages. It is almost as if this section of fans in the Star Wars Universe can’t seem to separate fiction from the real-life counterparts. I am not sure the hate on the actress, however, who by the way is a fan like all of us. You can’t tell me that if an opportunity arose to be in Star Wars film, that you would no take it. That would be like me turning down a pie. It’s not happening. The group of “Fans” and I am using that term loosely posted sexist and racist comments on her Instagram page after each new post. And even the fan-edited Wookieepedia was not left out as people changed her name and homeland to include the phrase, Ching Chong. The worst part about all of this is that it is coming from adults who apparently have nothing else better to do than torment an actress. 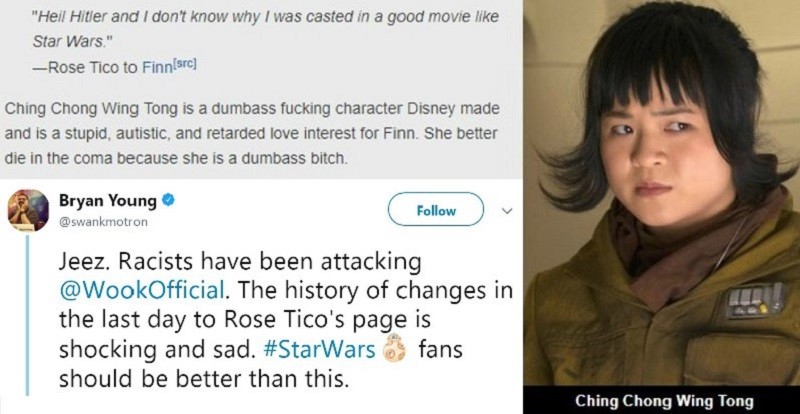 But this isn’t the first time that this happened. Daisy Ridley happened to run off of Instagram after The Force Awakens. I am still wondering if this section of fans is worried about strong female leads? Because it sure seems this way.  After the prequels, George Lucas was given the moniker “The Rapist of Childhood Memories.” Not to mention young Anakin, Jake Lloyd was driven insane, directors, producers, and alike are continually being bombarded with some sort of bull shit comment. Not about the movie, but why they should kill themselves.

I am a fan of the Wars. And I will be the first to tell you, that I enjoy all of the movies. Do I find problems with things? Yes. I am a human. Can I have an open discussion without being a complete twat waffle? Yes. That is what makes our fandoms unique.

The original is still the best, and I am not sure that there is a Star Wars fan out there that would argue, but guess what? We are getting new movies for a new generation. Remember when you watched Star Wars on the big screen for the first time? Remember how special it was the first time the scroll came on the screen. Remember that feeling. That same feeling is the same feeling a new generation is going to get to feel when sitting down in a theater to watch a new movie. 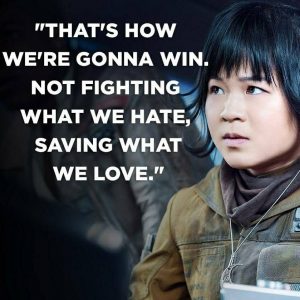 We stand with Kelly Marie Tran. The idea of trying to destroy someone’s life because you did not get the movie you wanted is bullshit. Because if I know anything from other fandoms, you will never get a movie that you enjoy. You will sit and keep bashing on these men and women who part of a franchise that you say you are a super fan of when in reality, all you want to do is compare them to the original.

I know I am going to take a lot of hate mail for what I am about to say, and I do not care. There is always a small part of each fandom that seems to the vocal majority. The fans that seem that if they do not get their way, they will lash out at everyone. They will take to social media and try to break people down. The people who act like this are not part of the fandom. Instead, they are to the fandom what the Westboro Baptist Church is to Christianity, a group of people who are full of shit and try to get all of the attention. And just saying do not watch it is not the fix. However, maybe revoking your Nerd Card is the best option.