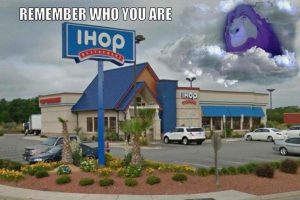 It has been a week since the International House of Pancakes decided to launch a marketing campaign to call themselves the International House of Burgers. And in that week, I have decided to let this information bake in my brain. I wanted to mull this over, and I feel that there is only one logical response to make in this situation. IHOP, WHAT THE FUCK ARE YOU THINKING?

Time to rewind. A couple of weeks ago the restaurant chain that brings you pancakes and poor service launched a video saying that the name was going to change to IHOB. Leaving us the consumers to try to figure out what the B stood for in the title. Logic would tell us that it could be Bacon, Bagels, Breakfast. BREAKFAST. The answer should have been Breakfast. But nope! The B Stood for Burgers. I am pretty sure there is already an International House of Burgers, and it’s called Wendy’s. (I chose Wendy’s because I do not want to be destroyed on Twitter.)

I am not sure I know of one person who ever craved a burger and said let’s go to IHOP! There are only three reasons that a person would actively seek out a trip to IHOP. #1. You are drunk. Yes. It’s 2 in the morning; the bar tells you that its time to go home. But you being the rebel that you decide that it’s not the time for that. You call for an UBER or ride with your one sober friend and go to IHOP to get some wonderful THH! (Toast, Hash browns, and Ham! And adding Pancakes is acceptable.) #2. It’s because your grandparents want to go. I feel the same rule applies here that applies to Golden Corral. Chances are you do not have a choice on where you are eating with the family. And if you are with your grandparents, you are going to eat early enough to make sure they get back home in time to watch the 6 o’clock news and Wheel of Fortune. You are eating at an all you can eat buffet, a Cracker Barrel, or an IHOP. And #3. BECAUSE YOU WANT SOME GOD DAMN BREAKFAST! 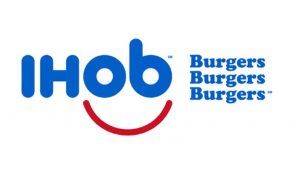 Going to IHOP and ordering anything other than Breakfast or Pancakes is the food equivalent of committing blasphemy. Going to IHOP for Burgers is like going to a brothel to get marriage advice. Sure, it may help. But you are going to feel extremely dirty, and you are not going to be able to look a burger in the buns again. And why in the world as IHOP not made a breakfast burger with Pancakes as the buns. That idea is a license to print money.

I have a feeling of changing the name to IHOB and promoting burgers is going to fall under the same category as New Coke. A humongous failure in which a large company will remember their sweet fluffy roots.