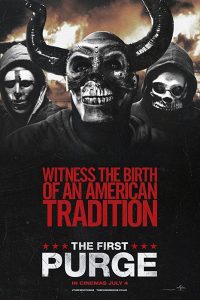 Having never seen the other films in the series, I thought that I’d start by watching the prequel to the other three films. The First Purge (2018) takes place before the other three films. It begins with the rise of a third political party called the New Founding Fathers of America (NFFA). Due to the economic and financial crisis paired with the lack of support in the Democrats and the Republicans, the NFFA is able to get their candidate elected as President of the United States. The NFFA and the President stake their political future on the success of an experiment called the Purge.

The first Purge isn’t across the whole country like the other films. It’s based on Staten Island with the promise of expanding to the entire country. Marisa Tomei plays Dr. Updale, the architect of the Purge. She reasons that people must be given a release from all the laws and have the freedom to purge their repressed feelings of anger. Of course, the NFFA have other ideas for the experiment. They want the Purge to thin out the country’s ever increasing population. The country is overpopulated, the unemployment rate is sky high. The NFFA believe that an annual Purge would solve these problems.

The citizens of Staten Island are not trapped on the island, they are allowed to stay or leave. The NFFA is enticing those that do stay with $5,000 base pay to be studied. They get more money if they actually participate in the Purge.

So that’s the setup for the movie. The first act of the film is boring, which is understandable because while the entire Purge is being explained and setup the main characters of the film Dmitri, Nya, Isaiah, and Dr. Updale are all being cultivated and fleshed out. Dmitri, played by Y’lan Noel, is the gangster with a heart of gold who is trying to protect his people and his property. Nya, played by Lex Scott Davis, is the activist that is protesting the Purge but ultimately stays on the island. Isaiah, played by Joivan Wade, is Nya’s brother but also is staying on the island in order to get his vengeance on Skeletor. Skeletor, played by Rotimi Paul, is a psychotic drug addict who only wants to slaughter people during the Purge.

There are a lot of problems with this film, but before I get there I’ll touch on the few things that I did like about it. The first is the acting. The acting from those I just mentioned were all performed decently, but the characters of Dmitri and Skeletor were the best. The audience rooted for Dmitri as he tries to survive and keep those he loves alive during the twelve hours of the Purge. Skeletor was my favorite character because he was just so chaotic in nature and Paul executed that creepiness perfectly.

When the film does get going, the action is rather exciting and fast paced. The third act of the film reminds me of the film Die Hard (1988) on drugs.

Another aspect of the film that I really enjoyed was the glowing contact lenses that paid participants of the Purge wore in order for the NFFA to monitor the experiment. The movie played with the creepiness by having only the glowing eyes show up in the shadows and so on.

Unfortunately, that’s the end of the list of things I liked about the film. So here’s where I get to the dislikes of the film. First off is the political message of how minorities are treated by rich, white, politicians. When the citizens of Staten Island don’t perform to the level the NFFA expects, they send out white mercenaries dressed as Nazi’s and the KKK. The audience is beat over the head so savagely by the political themes of this film you might think we were actually in the Purge. 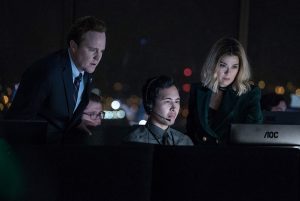 The pacing of the film was off kilter. The first act of the film is spent building up to the start of the experiment. The second act of the film is spent primarily during the first few hours of the Purge as characters run around the island experiencing non-violent acts. I believe the dead body count is less than five during this act. The final act is where the action finally ramps up. The film is only one hour and thirty-eight minutes long, but because the pacing is off it seems to drag on in the first and second act.

Character arcs are abandoned halfway through the film. It’s almost as if the filmmakers didn’t know how to resolve the storylines of two of the main characters, though admittedly this does help to isolate a singular storyline.

Overall, this film was too long, predictable, and boring up until the third act. If you’re a fan of the Purge series, then this is one to watch when it comes to Netflix or Red Box. My advice would be to skip it when you’re thinking of what to see in theaters.

Spoiler Section! Avert your eyes if you don’t want to be spoiled!

Few things I needed to explain about the above-mentioned review. So, the three main characters of Nya, Dmitri, and Isaiah all learn that the NFFA is the group behind the mercenaries. They all survive the first Purge. Yet, the Purge continues because this film is a simple prequel. The main characters surviving really doesn’t have much importance because they fail to prevent future Purges. The creators of this film want to bash the audience’s heads in with the political themes. It would have been so much better if they cut about twenty minutes from the second act and added a scene at the end where the three characters are addressing government leaders about the mercenaries and then are totally discredited. That would add to the theme of the powerful rich white guys toppling the poor and downtrodden minorities.

Another thing that really made me dislike the film is the stunted story arch of Isaiah’s revenge against Skeletor. The film spends so much time setting up this story arch. Skeletor is meant to serve as the minor villain. Except he disappears during the second act and then pops up at the end of the film. Isaiah isn’t even the one to kill him and therefore complete his story arch. The mercenaries are the ones that kill him. All the time setting up Isaiah’s arch is completely pointless by the end of the film.