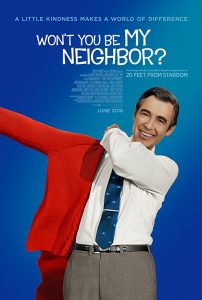 It’s been 17 years since Fred Rogers appeared in front of a camera. I feel old just thinking about the fact that there’s an entire era of soon-to-be adults that haven’t grown up watching Mister Rogers’ Neighborhood (1968-2001). For those that have grown up being neighbors with Fred Rogers this documentary is such an eye opener about the man behind the sweaters.

This documentary is from the Academy Award-winning filmmaker Morgan Neville (20 Feet from Stardom). The entire film is comprised of show clips, real life footage, behind the scenes clips,  newsreel, and interviews from the cast, crew, friends, and family members of Mister Rogers. Between sections there’s animated parts of Daniel Tiger with voice over. 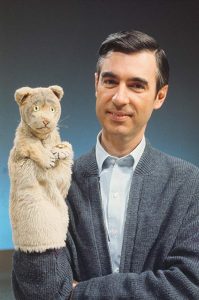 What the audience finds out about Mister Rogers is that the man in the colorful sweaters wasn’t a friendly facade. The man in front of the camera was also the man when the cameras were off. The documentary doesn’t showcase Fred Rogers as a perfect model of a man. It also shows the many flaws and how he dealt with them.

Most of the documentary details why Mister Rogers and his children’s show was so different from all the other television programming designed to children. It also explains why the show and the host were needed.

The emotional impact of the documentary will effect even the most hardened viewer, including the writer of this review. How I know this is that throughout the movie there were sniffles and even some nose blowing. I can safely assume this was from the emotional impact because the film debuted in July and there’s not that many summer colds in one theater. If you don’t at the very least tear up you are dead inside. 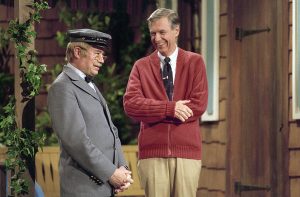 I came out of the theater simply marveled by not only the quality of Mister Rogers’ Neighborhood, but moved by the love, care, and attention Fred Rogers gave towards his life’s work which was the development of children.

While this isn’t a film you had to see in theaters, it’s definitely one of the best to see when compared to some of the other films that share a movie theater with Won’t You Be My Neighbor? If you’ve grown up watching Mister Rogers, but never researched the man or the show I’d highly recommend watching it because, if nothing else, you’ll come away learning something new and important about life. And really, learning about something new and important about life is what Fred Rogers labored tirelessly for all his life.