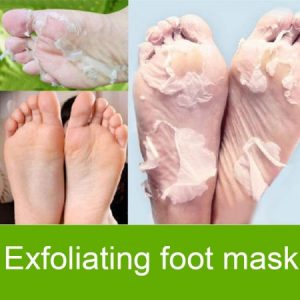 Before giving up Facebook, I fell victim to yet another product advertisement. I am slowly realizing that I am a very impressionable person and it is a little scary. Has anyone seen that episode of Community where there is the “guerrilla marketing”? Dean Pelton turns out to be level seven susceptible and buys multiple Hondas. I might be level seven susceptible also. Anyway, back to the main point. This one was for an exfoliating foot mask. The premise was simple. You place your foot in a plastic bootie and all of the icky, dry skin will magically vanish. No expensive pedicure. No hard work with a pumice stone. Super easy.

I turned to trusty Amazon and used my beloved prime membership. This product came with two sets, each set individually wrapped. When I first opened the package, the first thing that hit me was the smell. An overpowering mix of acetone, vodka, and potpourri. I slowly pulled out the cold, slimy, booties. I imagined that they would be made of a durable plastic. This was made with something akin to thin plastic wrap. Like the type that covers a DVD – except way easier to destroy. The liquid had already leaked out of one of them despite the fact that it was supposed to be sealed. I opened the other set to find that there was only one good bootie. At least I had one usable set when combined. I used scissors to cut an opening so that I would be able slip my foot inside each bootie. Anything that smelled like that would surely burn. I debated on backing out of this experiment. I edged a toe in to test it before proceeding. It was not painful. Once I had them both on, I saw that the floor was wet. The concoction that found a way to ooze through the “waterproof” plastic socks. I yelled for my son to bring me a towel. He stepped in the room and started gagging at the smell. He did not stay any longer than necessary. The whole process was supposed to last for an hour but the solution had vanished before the thirty minute mark. It had all soaked in to the towel. I cleaned up the mess and washed my feet. I was so annoyed with myself. Granted, I did not buy two unnecessary cars like the Dean but I still feel like I had squandered hard-earned money.

The package had said to soak feet in warm ten minutes each day and that the peeling would start between day four to six. Since the whole thing went disastrously, I did not soak my feet. In fact, I did not expect any results. Five days later, I absent-mindedly noticed a deep, jagged groove in the bottom of my foot. How had I cut my foot and not notice it?! Upon further inspection, I realized that it was the beginning of my skin peeling. I still did not expect much. Slowly but surely, the mask did as advertised. It was fantastically disgusting. After I would get out of the shower, my skin would be soft from the water. I would apply lotion and my skin would begin to peel off in layers. Gobs and gobs of dead skin. If I was not a nurse, I would have been horrified. Socks at all time where a must. It looked like I had a deadly skin disease. This went on for two whole weeks. Finally, when it calmed down, I had the softest feet that I ever remember having in my entire life.

Overall, I would probably do this again. The end results were amazing. However, it will not be something that I do often. Maybe once a year. It was super frustrating from start to finish. The brand that I got was moderately – higher priced and it still seemed poorly made. The reviews were mixed but its overall rating was good (4.5 stars). The peeling process with ridiculous. It did not hurt but I didn’t think it was every going to end. Make sure that if you choose to do this that you do not pull on the skin because you can seriously hurt yourself. I highly discourage people who are diabetic from using products like these without discuss it with your doctor first. Bonus points if your significant other who is not easily grossed out.