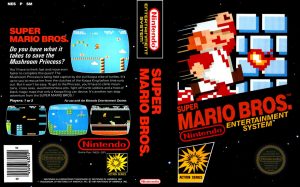 I want to make something very clear before I dive deep into this article, I am not an avid gamer. Sure, I have a PlayStation 4, but ultimately, I have played about three games in two years, but have used the PS4 as a DVD player more times than a man can count. That being said, recently I rediscovered my love for the video game genre. My wife’s birthday is approaching, and I being the good husband that I am (I also wanted to eat.) bought her a Nintendo Switch. Of course, it was one of the bundle packs with Mario Kart because nothing says spousal abuse more in this house than being hit by that blasted blue shell. But, I also told her that she could get another game. The game she chose was Super Mario Odyssey. And damn, that decision was better than marrying me.

The new Mario game sucked me back into a world of jumping on Goombas and hitting question mark blocks. But, the one thing that makes me even more happy than anything else is the 8-bit levels spread throughout the game. Those levels take me back to a much simpler time. A time where drinking Tang was still acceptable and Friday nights was about ABC’s TGIF lineup. And then I got to thinking, how much fun was the original Super Mario Brothers Game for the NES system. Well, I found an emulator online and decided to replay one of my favorite games as a child.

However, this is when it all turned to the dark side. I know a few of you already knew this, but I had no idea, I decided to read the manual. If you haven’t read the manual for The Super Mario Brothers game for the NES, let me enlighten or horrify you depending on your personality type.

And if you can’t read the photo, I have typed it out for you. 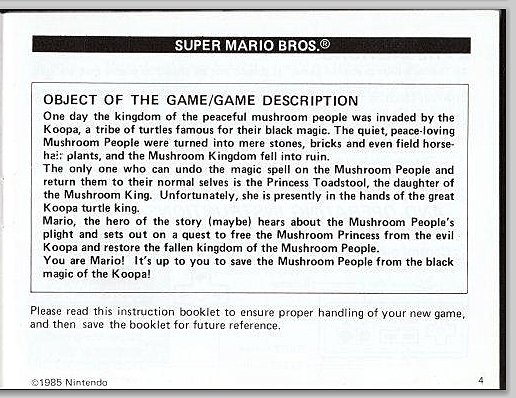 One day the kingdom of the peaceful mushroom people was invaded by the Koopa, a tribe of turtles famous for their black magic. The quiet, peace-loving Mushroom People were turned into mere stones, bricks, and even field horse-hair plants, and the Mushroom Kingdom fell into ruin. The only one who can undo the magic spell on the Mushroom People and return them to their normal selves is the Princess Toadstool, the daughter of the Mushroom King. Unfortunately, she is presently in the hands of the great Koopa turtle king.

I never thought in my years of becoming an adult that I would read something that shook me to my very core. If Mario gets a mushroom from a box and becomes bigger, does this mean that he is eating their soul? Is Mario tripping on the souls of the Mushroom People? That would semi-explain that Raccoon suit in Super Mario Brothers 3. Also, why in the world doesn’t the toad in the first castle alert Mario to these facts? It would make a person think that Toad is kind of a dick and wants the kingdom to himself. And what kind of toad produces question marks? Are they toads that were attending the Mushroom Kingdoms version of SDCC and cosplaying as The Riddler?

I am 33 years old, and yet somehow, I feel I need to rethink everything about life. So, there is not a good guy in the Mario games? And if there is a good guy is it, Pauline, because she dumped his ass? So many questions, so many What The Fucks.