Lauren Duski Throws Fear Out the Window and Rips the... 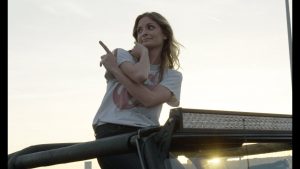 Lauren Duski cuts deep on her debut single, “Costume Party,” which was finally released Wednesday, July 11th. The talented singer-songwriter bares all on her first single since coming in as runner-up on Season 12 of The Voice, shining an unfiltered light on what self-doubt and insecurities really look like.

Written from a place of complete vulnerability, Duski’s raw and emotional debut removes the mask many of us hide behind for fear of how others will judge us, and instead poses one simple question – “Why’s it so damn hard not to give a damn?” It’s an issue that more people struggle with than will care to admit, and Duski faces it head on in just three minutes. Her relatable lyrics and passionate vocals take the song to a level most artists struggle to reach, no matter how many years they’ve been at it.

“I wrote this for anyone who’s struggling to be themselves.” the singer said in a tweet about “Costume Party.”

With its blatant honesty and inspiring message, “Costume Party” is nothing short of amazing. It’s the kind of song that doesn’t just deserve the attention, but it’s exactly what the music industry and not just country radio needs to hear.