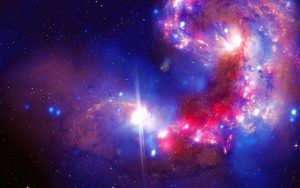 All of the Anunnaki guards run, while an alarm sounds. The ringing from it bounds from mind to mind as Anunnaki commoners scramble to hide inside their homes. Only then, it is the royals who are still standing watching through the guard’s eyes as they run past the heavily guarded entrance.

Ina and Nini run with the rest of the guards, making their way outside the iron walls, and into the desert passing the oasis surrounding the back of the kingdom walls.

A light blazes through the air. A tall pillar of blue shoot from the ground into the sky as the intruder plummets to the ground, sending sand flying into the harsh winds of the desert. The crash site expands, revealing that it is wider than the royal ziggurat itself.

“Where is the craft?” Ina asks, a wave of telepathic energy spirals into the air and enters the other guards’ minds.

Ina feels a pull inside her mind. The message comes from a Iltal; the voice is gruff inside her mind, “Why, don’t you look around, check the place out for yourself. Both you and Nini go and search.”

“No, we would get killed. We are not the best–”

“Excuses, if you don’t do what I say, then we will tell the royals and have you fired.”

Ina let out a growl, as she imagines her body dead and bleeding on the ground. She is not going to let a Sirian kill her; she has a full life ahead of her, including one on Nour. She shoves an image of blood back towards Iltal, hoping for a second that he is the one that has to go out and check.

Without questioning, Ina slides down the mouth of the crater, along with Nini.

The wind blows against their dark beaded hair, sending each strand jingling.

The sun is already beginning to set. A desert wind, keeps both from seeing the stars and the distance ahead. Nini crept first into the forbidding winds; her orange wings disappearing into the desert sands.

Pulling her tabard over her nose, Ina follows, keeping her white feathery wings taught against her back.

The bond stays intact, making Ina feel safe, “If I die I hope I at least get to see Nour at least once, before I disappear completely out of existence.”

She falls to the ground. Her feet catch onto something warm, hotter than the sands beneath her feet. On her knees, her hands glide over the stone she tripped over, feeling for a door; there is no door. Only crevices and dents cover the thing. The thing must be the craft, no it is a fallen meteor. She reaches out her mind and calls for the guards, they all respond, coming to her aid. And with her mind, she could feel with her mind that Iltal stayed behind.

The winds stop completely, a night sky fills with stars and a moon hovers over the horizon. All the guards gather. Mental chatter fills the air as the guards take turns hitting the rock with a pick until it breaks open. The guard stopped what he was doing, and looked inside. Ina peered in with him, as well as Nini. Fine strands of silky white hair peek through the crack; hair, which the guard strokes lustfully. Ina pushes the man’s hand away, “Stop, I want to see what else is in there, besides pieces of hair.”

The guard growls and walks away, allowing Ina and Nini to see what is inside. Chipping away more rock, reveals more hair, than skin, and bits of cloth. Rock falls off of the strange being inside the meteor as the guards pull her out by her arms.

Laying the being on the ground, Ina studies the being’s hair and face, noticing that the being is asleep. She takes in the being’s soft heart shaped face, large closed eyes, small nose, and mouth. Her light pink lips form a soft o. Her hair pools on the ground behind her, forming a halo around her head. Ina notices a crown of three metallic wiry spirals on her forehead; a single light blue teardrop dangling from the center-most spiral.

Ina’s heart beat raises as she takes in the being’s long flowing white robes and necklace, made up of the same wiry spirals as her crown.

The being looks regal, yet weak. It could be useful inside the Dodecahedrons. Ina thought, taking a step back. Nini strokes the being’s hair, “It is so soft.”

“Enough! Stop whatever you’re doing. We don’t want her to get dirty.”

Nini huffed under her breath, “Fine.”

Ina creeps closer to the being and picks her up by the shoulders. She calls for help, and three more guards surround the being, picking her up by her legs, and two guards hold her at her torso, and they push through the desert, making their way back towards the kingdom.

Angry
0
Angry
K.E Blackham likes to write Fantasy and Science fiction stories; Is an avid book reader, likes to draw and paint, and loves coffee. She also has a love for all things paranormal and ufo related.