Werq The World Is A Trip You Need To Buy...

Anyone who knows me, knows that I do not get out of the house that much. I am content with a night full of binging on Netlfix and Chinese Take-Out. But there is one show I have been a fan of for years. I am sucker for reality tv and this show in particular. The Emmy award winning Rupaul’s Drag Race. If you are not familiar with the show, it is not about cars. It is a competition highlighting 10 to 16 Drag Queens to compete for the crown of America’s Next Drag Superstar. So, when the opportunity presented itself to a live stage event featuring some of my favorite queens from the show, I fiercely pounced.

Last Friday Night, we were able to take in the Rupaul’s Drag Race: Werq the World Tour presented by Voss Events at the sold-out Pageant Theater in St. Louis, Missouri. First thing has to be said, the venue may be one of the best in the country to see a show. The staff was very friendly to my date and I all night long. It seemed that each person working there loved their job, well at least on that night.

One of the things I love to take in at a show which may be just as important as the show itself is how the crowd acts and reacts. Sitting to our left was a father and son, who was so excited about being there it was not even funny. He cheered all night long as if it was the Super Bowl. You could see the son’s eyes light up as each performer would take the stage for their number. And then sitting to our right was a very beautiful couple who are huge fans of the show. He got into the show as well, but I will get to that in a little. 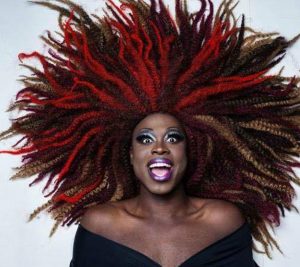 The show starts with season 8 winner Bob the Drag Queen. Bob was the perfect host for this event. She was able to bring a different kind of energy as an emcee as some of the other performers and guests brought to the show. And her lip syncs were on point. Especially the where she grows wings. I would include a lot of photos with this, but I have a reason I am not. YOU NEED TO SEE THE SHOW FOR YOURSELF. And as great as Bob’s numbers were, he even hosted a drag competition with the audience. He asked for the oldest, the gayest, and a big girl to come strut their stuff on the stage. Each member of the audience picked a wig, and that was the number they had to perform. And the oldest takes home the gold channeling her inner Tina Turner, even the crowd was chanting her name. However, it can be said the big girl in the Sailor Moon costume brought her A Game. And while this was going on, Bob was able to engage with the audience. Bob made you feel part of the show from start to finish. A trait a lot of emcees have lost over the years.

Each queen was announced and what part of the world they represent. And each of the girls performed a few songs together which were straight fire. One of the most fun numbers was the Boxing/Sports number that featured all four finalists from season 10.

The first solo performer not named Bob was Asia O Hara. Her theme was Rio De Janeiro and it was a very colorful number. And damn, can that girl move. She was high energy for the entire time she was on stage, and a great way to keep the crowd energized.

Season 10 Finalist Eureka O’Hara then brought the house down by representing London. However, as a big gurl myself watching Eureka on stage owning and not being afraid to be herself is an inspiration to anyone. I have a lot of issues with my body and become very insecure. Seeing someone being able to own the stage makes me want to better myself. If anything, her number alone was one of the best I have witnessed at any drag show I have attended.

Kameron Michaels, the body building queen from Nashville, had the most artistic performance of the evening by channeling her inner wicked queen. And what an amazing performance by her. You could see the crowd’s eyes locked in on her for the entire duration of her number. And rightfully so.

Season 7 Winner, Violet Chachki, brought Bettie Page to life through her number giving the crowd a burlesque show to remember. Her performance ends with a striptease and splashing in a giant Martini Glass. Another great number for the evening.

Season 9 Controversial Queen Valentina took the stage, and this is where the fun begins for me with the awesome couple to my right. The gentleman to my right was so excited he may have almost broken his partner’s hand. He was so in love with Valentina and so was the audience.

And finally, the moment where the guy may have bruised my knee out of excitement, Season 10 winner, Aquaria. Not only was he grabbing his partners hand, he was excitingly slapping my hand in excitement. Aquaria’s number had a Kill Bill theme was unreal. You can see why four of the queens featured were in the finals, and you can see why Aquaria was the winner.

And I almost forgot about the unsung heroes of the show. The dancers. All night bringing energy to the stage.

So, how does the show rank…. If you are a fan of the show, go see it. If you are a fan of the show, but didn’t like some of the queens on the small screen, this will change your mind. I had a love/hate relationship with Eureka while the show was on. But she even came out from behind the curtain and met fans. And if you never seen the show, you should go. Because you will get your money’s worth. It’s difficult to experience a show where not everyone is texting or on their phone ruining the experience for others. But this was one show where everyone there was wanting to see the show. The tour runs until the end of October, visit Voss Events to see if Werq the World is coming to a city near you.