She Is My Doctor 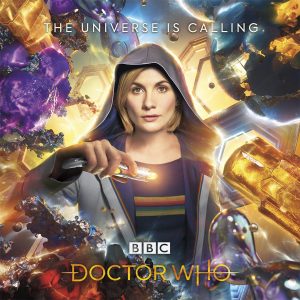 It has been Christmas since my last visit with The Doctor. At that point, my Doctor was a bitter old man who as able to hit you with some wisdom and the occasional sarcasm. And that is what I came to expect from my Doctor visits. But that was the last visit till today. And now, I am visiting a new Doctor. One, I do not know anything about. I was nervous in anticipating our first visit. Would it go well? Will this Doctor be someone that I can trust? Well, I can say without a shadow of a doubt, I am glad she is my Doctor.

Doctor Who returned to the small screen today with a global simulcast to bring the 13th Doctor to the world. And as I discuss today, I am going to remain as spoiler free as possible.

The moment Jodie Whittaker appeared on the screen, and she delivered her first lines as The Doctor, I just knew she got it. She was a breath of fresh air from the start. In the past few seasons, we have kind of had the same formula play out over and over. But not this time. While it was the same Doctor Who type episode, it felt different. She grasped the character early on and did not look back. One of the things that you will enjoy about the new Doctor is that she is going to be very creative. Without giving anything away, she does something no other Doctor has done and did it with spoons. She shined in the role. And social media mostly agrees with this as well and so does Rotten Tomatoes. No matter what, you can’t please everyone. And there are going to be a select group of people that were so disgusted by BBC casting a woman, that they will never watch again. And to those people I have to say, it’s your loss. Jodie was, dare I say, made for this role. Clever, witty, and a bit of light-hearted bad assery sets her first episode apart from the others. If you are a fan of the show, you need to give her a chance.

But there is more to Doctor Who than the main, what about the companions? As we discussed on our TBK Live Who Special this past Thursday, having three companions seems like a bit of an overkill. Saying that, I believe I am going to be wrong about that idea. I enjoyed the back and forth between all the new companions and The Doctor. Plus, each companion has their own story, in which you learn a couple in the episode. And as a viewer, I feel I am going to be more attached to these characters. It seems they will serve a purpose as the show moves forward. The villain in the first episode may be one of the creepiest looking villains in the run of the show. As new show-runner Chris Chibnall stated, this season will be about some new bad guys, well they gave the fans a small taste of what is to come.

The look of the show is more cinematic and I love it. However, I am going to be critical about something, I am not sure if this was a BBC America thing, or part of the simulcast, but way too many ads. It seemed as soon as you would sink your teeth into something new, it was time for a commercial break. Plus, no credits on the BBC America version. It went to a breakdown of the show with a panel, which is fine, but not knowing the show was done was kind of weird.

I have a lot of hope for 13. It is her first episode, and you can’t judge everything. But first impressions are huge, and she made a big one. Season 11 may be one of the best seasons yet. And a lot of that will have to do with writing and Jodie herself. I am very excited that she is my Doctor.