Disturbed Return to Chicago to Celebrate Evolution at Historic Vic... 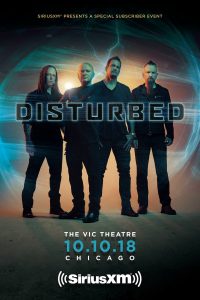 Chicago hard rockers Disturbed were greeted with an abundance of hometown love when they returned on Wednesday, October 10th to treat fans to an unforgettable performance at the Vic Theater. Presented by SiriusXM, the intimate event was in anticipation of the band’s seventh studio album, which was released Friday, October 19th. The Windy City show was one of only two 2018 performances for Disturbed (the other being Austin City Limits on 10/13) before they embark on their 2019 Evolution Tour in support of the latest album of the same name. Fans fortunate enough to attend this special show were the first to witness the live debut of the first two songs released from Evolution, expressing their approval appropriately with endless thundering applause.

Moments after the lights went out the band took the opportunity to share video footage with everyone at the Vic that commemorated a legacy lasting more than two decades. Nostalgia quickly filled the historic venue as fans watched memories from the band’s past tours flood the screen. Beginning with Music As a Weapon, every tour and festival Disturbed have played across the globe was visually represented, including the band’s time visiting and performing for our U.S. troops stationed overseas. And as the images faded to black and the words, “When music is the weapon, no one is safe” were all that were left, the screen began to rise, revealing front man David Drainman, guitarist Dan Donegan, bassist John Moyer, and drummer Mike Wengren on stage, eliciting an overwhelming number of shrieks and piercing hollers from the audience. If anyone in attendance had any doubts at all about how the night might go, they immediately disappeared the moment the band began performing.

Opening with the first track from Evolution, as Drainman belted the lyrics to “Are You Ready” it was obvious that Disturbed were BACK and ready for this next chapter. Fans made it clear they were ready as well, their energy never falling once throughout the night, only fueling the band to give one of their strongest performances. From that first chord, the band went full throttle making their way through their extensive catalogue, playing not just the hits, but fan favorites as well. With a set list that covered every album but Asylum, fans sang and screamed along to every word, showing their enthusiasm by throwing their fists and horns in the air, in sync with every pulsing drum beat and roaring guitar riff.

After melting fans faces off with their first eight songs, Drainman, Moyer, Wengren, and Donegan then took to the very front of the stage on stools with only a single spotlight on them. Already the band’s most personal and most inspiring song of their career, the chilling rendition of “A Reason to Fight” they performed next easily made for the most compelling part of the evening. From the moment Drainman began to sing we felt the passion in his voice. The overwhelming rush of emotion that hit the moment they reached the chorus (“When the demon that’s inside you is ready to begin/and it feels like it’s a battle that you will never win/when you’re aching for the fire and then begging for your sin/when there’s nothing left inside/there’s still a reason to fight”) was unlike anything else fans have heard from Disturbed before. Needless to say, it was a powerful few minutes.

The band continued the unplugged portion of the night with their haunting version of Simon and Garfunkel’s classic, “Sound of Silence,” and then kicked things back into high gear with “Indestructible,” followed by their cover of Genesis’ “Land of Confusion” and then the popular “Voices” from their 2000 debut album, The Sickness. After leaving the stage for a couple brief moments and then returning to a deafening round of applause and cheering, Drainman, Moyer, Wengren, and Donegan took their places again for an encore that included “The Light,” “Stricken,” and the song that started it all, “Down with the Sickness.” Despite the years that have passed since the Chicago natives started their musical ventures, Disturbed continues to impress their fans with each mind-blowing performance they triumphantly return with. Part of what makes them one of the best live acts in music is that that they don’t waste one minute that they’re on stage. They give the people what they want and they always have. They also never hesitate to express their gratitude to their fans – their “brothers and sisters” – for their continuous support over the years, and for always showing up no matter how much time has passed.

That night at the Vic Theater Disturbed proved once again why they are such a definitive force in the hard rock and metal genre.

Setlist
Are You Ready
Prayer
The Vengeful One
The Game
Stupify
Liberate
Ten Thousand Fists
Inside the Fire
A Reason to Fight
The Sound of Silence (Simon & Garfunkel cover)
Indestructible
Land of Confusion (Gensis cover)
Voices
Encore:
The Light
Stricken
Down with the Sickness