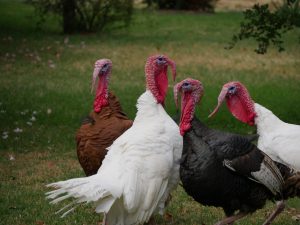 Thanksgiving is just a few hours away. And while we prepare to sit down with family to drive into a food coma mixed with some Xanax, something hit me. In second grade, my class presented a play about Thanksgiving. Doesn’t that sound like something fun? Seriously who wants to hear a bunch of kids with high pitch voices dressed like pilgrims. I would rather pretend that an electrical socket is my own personal glory hole. I know that had to be hell on parents. But something stuck with me from that play that still impacts my mind. All the way from the early 90s to now. The fact that still haunts my mind is that the American national bird was almost the turkey. Let that sink in while you pulling out giblets of your dinner tomorrow.

Apparently, Ben Franklin thought the best representation of America was the turkey. I am not sure about any of you, but I don’t think turkeys are that majestic? In fact, if you have seen a turkey up close, they resemble that one student from your graduating class who decided to hit the meth a little hard with chin balls. What was Ben Franklin smoking or taking? No wonder the dude created bifocals. Because this lapse in judgment had to come while he was partially blind. Even far away, turkeys are hideous. I do not think there is a person in this world that sees a turkey and thinks how pretty it is. Unless you can’t see. Logic. And if Ben got his way, would we still be eating turkey on Thanksgiving or would be eating bald eagle? We might be eating something even more awkward. “Well, honey, the Flamingo was already on sale for Thanksgiving this year.”

And yet, I recently found out this may all be fake news. Thanks, school, for warping my fragile mind. I guess the way you made it better was by putting stars on a button allowing me a free pizza that was the same size as a piece of a large. Well played. Well played indeed. Even if it was fake Franklin thought the bald eagle was a bird of immoral actions. Say what now? I hate to be this person, but Jack The Ripper was actually a rogue bald eagle. And now, something I wrote will end up as Snopes myth. Life made.