The Cure for Insomnia AKA Super Bowl LIII 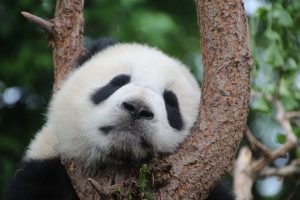 Watching a bear hibernate on Facebook Live would have been more entertaining than the 3.5 hours I spent on Sunday Night. I thought the game between the Patriots and the Rams would be bad but little did I know it would be the cure for insomnia.

I am not sure anyone can say anything good about the entire evening. On the first drive Patriots kicker, Stephen Gostkowski missed a field goal attempt which would be predicted by former QB, and part-time Psychic Friends Network phone operator; Tony Romo. It was at that moment; I knew we were doomed for a night of football that would make me yearn for the return of Slamball. I would write about the exciting things that happened in the first half, but umm, yeah. After a Patriots field in the second quarter, we enter the half in a barnburner with a score of 3-0. If I am a Saints fan, I am pissed at this moment. Somehow the Rams lost their will to play in the move from St. Louis. I feel a group of imaginary friends would have fared better.

And that brings us to the worst halftime show in the history of the FREAKING WORLD. Maroon 5 made me yearn for the days of Milli Vanilli. Adam Levine sounded like a ferret in a wood chipper. If Helen Keller were a judge on The Voice, she wouldn’t have hit the button on Adam. I am not wrong. He seemed just to phone it in. The performance lacked any energy or emotion. The only good thing was seeing Spongebob, but even they messed that up. How do you not play Sweet Victory? The NFL may actually be the fourth Stooge.

And the second of half of football kicks off, but somehow any care I have left to give would be left at 5:28 PM. Well, the Rams finally kicked a field goal. Omg. 3-3. Now if this were soccer, baseball, Uno, we would have a game. We are three quarters into the biggest game of the year, with supposedly the two “best” teams and not a single touchdown scored. I have not watched more failure at trying to score since the days of MTV’s NEXT. 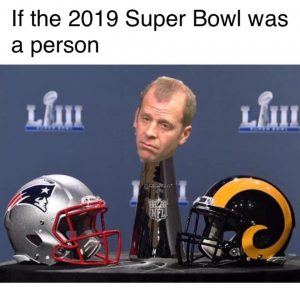 For the first time in history, we enter the fourth quarter without a touchdown. But eventually, with 7 minutes in the game and a flurry of passes from Tom Brady, that statistic is erased. The Patriots would finally add another field goal to take the lead 13-3. At this point, I started to rewatch season 6 of RuPaul’s Drag Race. I have a crush on BenDeLaCreme, and even though I knew the outcome, I was entertained. I started that episode with 4:50 left to go in the game. I watched the entire 42-minute episode, came back to CBS to see what the results would be, and there is still 4:30 left. THIS GAME WILL NEVER END. And if this game goes to overtime, I will know Satan was the mastermind. 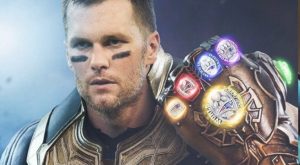 The Patriots win the game 13-3. That game seemed longer than my first marriage. But thank god it’s over. Thanos Brady completed the Infinity Gauntlet with their 6th Super Bowl. But if I know comics, that means the End Game for the Patriots next season.