‘My Little Pony: Friendship is Magic’ Ninth Season Will be... 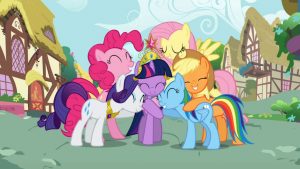 We turn to television as a way to escape everyday life. A lot of us will choose a show that in no way reminds us of the struggles going on in our own lives. For me that show was My Little Pony: Friendship is Magic. I know what you are thinking, and I don’t care. 2013 was riddled with the passing of my mother, being homeless, and a divorce, so you could say finding any sort of happiness would be welcomed. And in early 2014, while working on something for this site, decided to watch My Little Pony to see what the hoopla was about.

And for 22 minutes, I felt like the world was not caving in around me. Watching that show helped me through a time that depression ran through my veins. And while the show is not the most conventional choice to get through a tough time, the fact it was a positive influence in a world filled with negativity, the show will always hold a special place in my heart.

Earlier this week, Discovery Family and Hasbro announced the series would be ending at the end of the 9th season. A very long run for any animated series in today’s world. The 26-episode final season beings on Saturday, April 6th on Discovery Family and will also be on demand after the show runs.