Review of Bird Box (The Book) 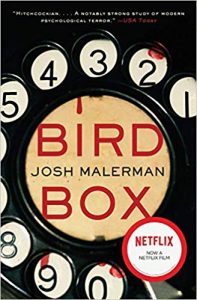 I only picked up this book because of the Netflix film, of the same name. I’d seen the film and thoroughly enjoyed it. As I had seen the Netflix film, I knew what I was getting into when I started the debut novel written by Josh Malerman. Even so, I’m glad I picked it up. Both versions of the story are equally great.

The story begins with the main character, Malorie, standing in the kitchen thinking. It’s been four years since the apocalyptic event that swept across the earth killing untold millions. What follows is a forty-three chapter game of tennis. Malerman switches from the present to the past almost every chapter. In the present, Malorie is gearing up to travel on the river with her two children, Boy and Girl. The destination is a promise of a safe place from the insanity inducing creatures. In the flashbacks, the reader gets the full story of why Malorie is alone and why she has two children of the same age with her.

This is one of the charms of the novel because when a chapter ends, it’s typically a cliff hanger and the reader won’t figure out what happens until a few chapters later. There were moments when I would reach the end of a chapter, look at the clock knowing I need to be somewhere, but couldn’t wait so I continued reading.

Another charming thing that Malerman does in his novel is never show the monster. The apocalyptic event is this creature that causes insanity in those that view it. So, reasonably, the reader never gets even the hint of a description other than it might smell bad. Even when the characters see the creatures, they don’t see the creature. For some writers, that might be a hindrance, but for Malerman he writes it really well. The way characters live in the world where vision is a danger, they wear blindfolds. This natural isolation makes even a leaf falling on the characters shoulder spooky. Is it a leaf? Is it a crazy person taunting the character? Is it the creatures? The characters don’t know and that’s when their imagination is the enemy. Even though it’s a leaf or a random twig breaking is intense to a reader because they don’t know either. They are, literally, in the dark like the characters.

The one thing that bugged me about the story was the lack of technology it employed. Presumably set in 2014 when Malerman wrote it, there isn’t much use of technology. Characters use phone books to call numbers using a landline. They don’t access the internet even though their power is still on. There is no GPS and the characters have to use mileage on their cars to judge distance. It felt like I had picked up a book from the early 1990’s. Which isn’t a bad thing, but for younger readers it may not be a relatable literary experience.

Bird Box is an interesting tale of survival and what a mother would do to protect herself and her two children. It’s an intense novel that’s a true page turner. Even though you know the fates of the characters, you’ll be cheering for the ill-fated characters during the flashback chapters. If you’ve never seen the Netflix film, give it a watch because it’s really pretty good. If you’ve never read the novel written by Josh Malerman, give it a read because it’s just as good.

If you want to read an apocalyptic novel that doesn’t include the normal amount of blood and gore that is commonplace in most of this genre, Bird Box is the novel for you.