The Clueless Reunion at C2E2

by Brodie Mann 1 year ago1 year ago

I was very excited to be in the audience for this panel. I love Paul Rudd and was super excited to see him in a live setting. I remember having the biggest crush on Alicia Silverstone all through the 90’s and wanting to meet her. I remember liking the actual film back in the day but really coming into my fandom of it later in life. This was a very fun and loose panel and while we did learn some interesting tidbits of information it was mostly about the 4 cast members having fun and relaxing while regaling us with amusing anecdotes about the film.

Breckin Meyer was the first one brought out and hot damn is this guy funny as fuck. He was cracking jokes, he was very genial and just seemed like the most easy-going down to earth guy you’ll ever meet. Donald Faison was next up and he is as animated in life as any character he has ever portrayed. He was full of energy and so good at getting the audience worked up with him. Alicia Silverstone was brought out next and the whole theater collectively lost their shit. As they settled in the Q&A got under way and what a delight it was. Alicia didn’t understand the character of Cher at first because it was so far removed from who she was as a person, but director Amy Heckerling won her over with the brilliant script. Donald then revealed that one of his favorite movies of all time is Fast Times at Ridgemont High and Heckerling’s work on that film really pushed him to want to be a part of this production.

One impression that began to wash over me is that these actors really love this film and love that they got to be a part of it. So many times in Hollywood artists try and distance themselves from the thing that brought them to prominence in an effort to avoid complacency and type casting. However, that was not the case at all in this panel. Donald rebuked this idea as well saying that he loved the character so much that he wanted to come back for the now failed Clueless tv series. Breckin had even made a comment at one point that he doesn’t understand people who try and walk away from the thing that made them famous and that he fully embraces the legacy of this movie and loves every second of it. He also let loose a little nugget that had never smoked or gotten high prior to filming and fully based his performance on a combination of Spicoli from Fast Times and Keanu Reeves from Bill and Ted.

Something I thought was interesting and exciting was that Alicia and Breckin had revealed that a lot of the iconic quotable lines were improvised and that Cher’s constant mispronunciation of certain words was genuine and kept in the film. At this point in the panel they started telling stories about Paul Rudd but people started to notice that he was nowhere to be found, that is until he bounded out onto the stage and the roof was completely blown off into the sky. Let me tell you, Mr. Rudd is every bit as charming and funny as you think he is. 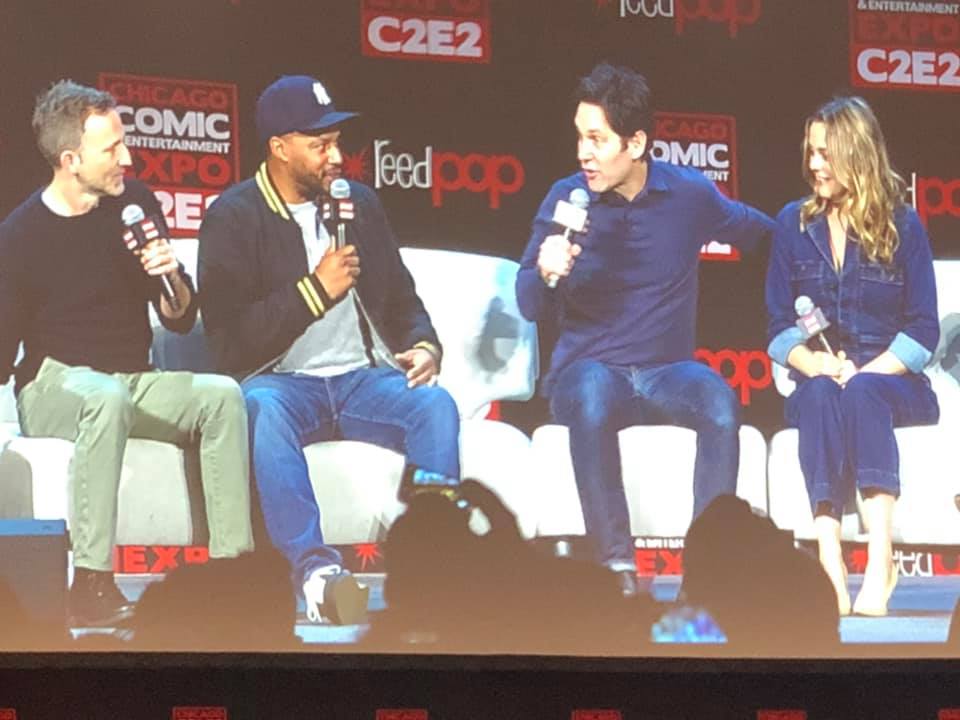 Paul used all of his own wardrobe in the movie to give his character a more realistic and authentic feel to what college students might be like at the time. After the table read through of the script, he brought the core cast to a bar to celebrate forgetting that he was the oldest cast member and thus the only one of legal drinking age at the time. Also, we learned that Paul, Donald and Breckin all lived together in Breckin’s house for 2 weeks during filming. Alicia also said that she had gone through a total of 64 costume changes through the entire film which everyone has a good laugh for in contrast to Paul’s more low-key costume and wardrobe choices.

At this point in the panel, the audience was allowed to ask questions and as I’m sure you could guess Paul got a barrage of Avengers and Ant Man questions some of which came from even Breckin himself. We learned that Paul had gone completely vegan and developed a rigorous workout regimen to prep himself before the very first Ant Man film. One audience member asked Paul what it was like to meet Stan Lee which elicited a collective “aww” from the entire audience. He then told us a story of how he saw Stan on the set of the first Ant-Man and that Stan had told him he was most excited about Ant-Man because he will finally get to see the effect of scale as he imagined when creating the character. There was a small moment of silence after the answer as you could tell everyone in the room, the cast included, had reverence for Stan The Man’s impact on pop culture.

The last question asked was about Paul’s work with Tim and Eric to which he admitted to being a huge fan of theirs and relished the opportunity to work with them. Alicia then hit home on how much she loved working on the movie, loved the chance to play character that stood in such stark contrast to her own person and that she was so excited to spend the rest of the weekend meeting fans and people whose lives were impacted by the film. Donald and Breckin seemed like they had been best friends their whole lives and seemed excited to get any chance to work together again. Paul hit on about how this was his first comic-con experience and that he was having so much fun meeting some of the nicest and kindest fans and people he’s ever come across.

This was an amazing panel through and through. Alicia Silverstone is one of the most beautiful and soft-spoken women alive and is every bit deserving of the legacy she has crafted for herself starring in this iconic movie. Breckin Meyer is the best friend you wish you had throughout your life. Donald Faison is just a damn funny dude and is a human representation of a looney tunes character writ large. I love him so much. Paul Rudd may have been the focal point for much of the panel but he’s so loved not only by the fans but by the other cast members that no one seemed to mind. There weren’t really any earth-shattering reveals but that was okay. This panel was mostly 4 friends coming together after many years of not seeing each other and reconnecting over stories of a movie that brought them together. It was just a nice and fun good time.