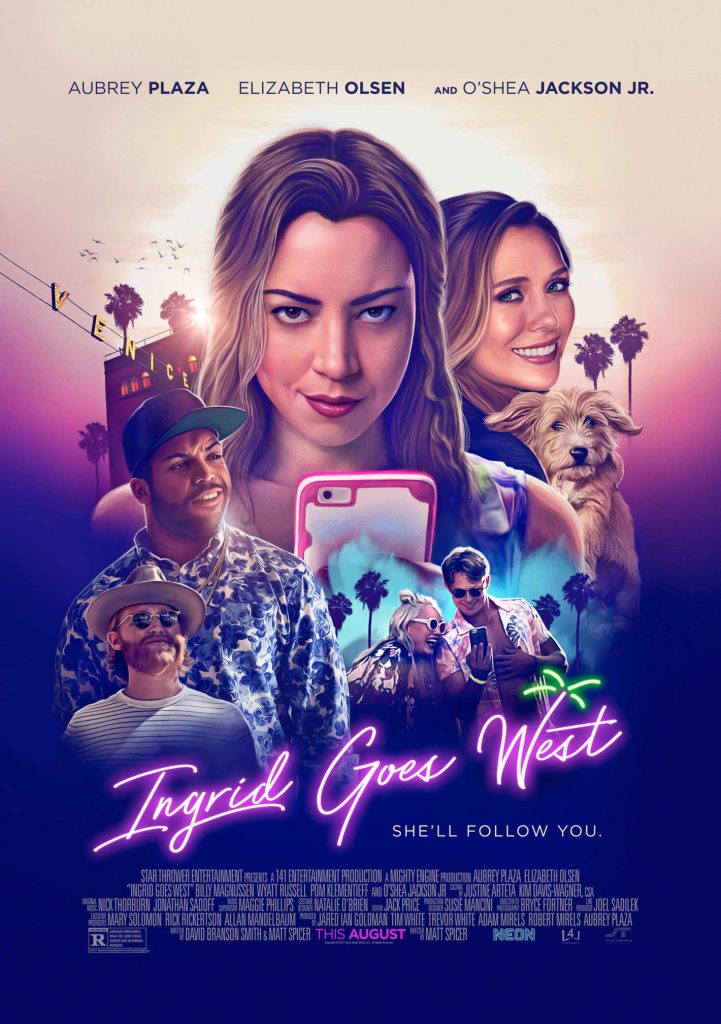 Where to watch it: Hulu

Review:
This movie opens on a low point in Ingrid’s life. She is not allowed into a wedding of a “friend” which turns out to be a person that she stalked online. A restraining order is now in place.

After some time in a mental faculty, she returns home and takes solace in perusing Instagram and imagining herself in a different life. She stumbles across a photo of avocado toast shared by influencer, Taylor. After much debate she settles upon the perfect comment. When Taylor responds with a fairly generic reply, Ingrid begins to imagine her life with Taylor as a best friend. Luck shines upon Ingrid when her mother dies and leaves her with a $60,000 inheritance. She gets it all in cash, packs it in her backpack, and heads to LA.

She settles into an apartment after forking over the rent in cash to her new Batman obsessed landlord, Dan Pinto. She begins to track Taylor across LA following her Instagram posts. She eats at the same restaurants, gets her hair styled at the same salon, and finally runs into her at a small shop. When that turns about to be awkward, Ingrid turns to Plan B. She steals Taylor’s dog. Taylor and her husband are so grateful to have their dog returned safely, they invite Ingrid into their home. Eager to make a good impression, Ingrid buys a painting from Taylor’s husband who is an aspiring artist. Then before leaving she offers to let Taylor use her truck to drive to a local town. The issue is that Ingrid doesn’t have a truck.

Ingrid persuades her landlord, Dan Pinto, to let her borrow his truck. In exchange she must read the part of Catwoman in screenplay he wrote when she returns. Ingrid and Taylor have a great time on their road trip. They use all of the cocaine they find in Dan Pinto’s truck, stay way later than promised, and scratch the side of his truck up when Ingrid tries to run off the side of the road on the way back. Upon returning, Dan Pinto is understandably pissed. Ingrid smooths things over with him, then has sex with him with dressed as Catwoman.

Later, Taylor begins to spend time with her brother and Ingrid become jealous. While at a pool party, he steals Ingrid’s phone and finds the evidence of her creepy behavior. Scared of his threat to expose her, she finds some kids in a parking to and pays one to punch her. She proceeds to tell Dan Pinto that Taylor’s brother attacked her and he must defend her. This goes terribly and Dan ends up in the hospital in critical condition.

Ingrid reaches out to Taylor multiple times and leaves a crazy number of voicemails. Finally, Taylor’s husband answers and tells Ingrid to stop calling. They know what she did. In one last ditch effort, Ingrid spends the last of her money to buy the small property next to Taylor. They have a confrontation after Ingrid sneaks into Taylor’s Halloween party to charge her phone. Depressed, Ingrid returns to home. Surrounded by a circle of candles, she records a video telling the internet good-bye. She swallows a bottle of pills and lays down. She looks at a framed photo of her and Taylor from their road trip as their song plays and she closes her eyes.

She wakes up in the hospital to a room filled with balloons and flowers. The nurse tells her that she is internet famous. She even has her own hashtag. Dan Pinto comes into the room in a wheelchair and explains that he saw the video and called 911. Her video touched the hearts of many lonely people and suddenly she had followers. She now had the friend and admirers that she had always dreamed of. She just had to try to kill herself to achieve it.

This is a super dark comedy and I mean dark. You have to look for the veiled comedy at times. If you look at the reviews on IMDB. People are not super crazy about this movies. The ones that kind of like it see it more as a cautionary tale. And it is certainly that. This story is very current and believable. There’s probably a Lifetime version somewhere.

I enjoyed this movie because of the cast. Aubrey Plaza is one of my favorite actors. She does dark and crazy like it is second nature. She becomes Ingrid in this movie. It is clear that Ingrid sees no problem with her actions and she will do whatever is necessary to achieve her goals. Elizabeth Olsen is also fantastic. Her character is more lighthearted with a hippy vibe. She wants to fit in with the LA culture badly. She wants to be accepted and be successful as an influencer. She shares some traits with Ingrid in that sense. Except she’s sane whereas Ingrid is obviously mentally unstable. The end is bittersweet. Taylor is free from Ingrid. Dan Pinto gets Ingrid who he cares about for some unknown reason (maybe that Catwoman role play sex?). Ingrid gets internet fame and friends. But will she get the mental health that she needs?

Is it worth watching: Big maybe. This is a tough one for me to answer because it’s not as simple as basing the answer on the quality of the movie. It is a good quality movie in my opinion. It is well paced and not boring. I have no complaints about the acting or the script. The meaning of the movie is clearly relayed. I personally enjoyed the movie. The choice comes down to the viewer. Is this the right film for YOU? I can’t even begin to guess in this situation.