by Stick Figure Dan 1 year ago1 year ago

Dear Fat Ass Who Is Out of Breath After Lacing His Boots,

Do you think Mrs. Claus gets tired of hearing your fat ass snore every night? I bet you sound like a combination of Darth Vader and SpongeBob SquarePants Butt Fucking on a beach pier in the middle of summer. She could do me and the world a favor if she would just smother you with a god damn pillow. It would put both us out of our miseries and that is the true spirit of Christmas. At least that is what every Hallmark movie tells me the spirit of Christmas is each year.

We know I am a piece of shit, so me actually being on the nice list is like the Dallas Cowboys winning the Super Bowl. Fucked. I guess we need to discuss what I want for Christmas this year. Well, the answer to that is simple. I want the leader of this magazine to meet the ultimate ending. I get that you like Christmas but it’s because it’s the only time you get cookies. Hell, if you dyed your hair blue, people would think you lived on fucking Sesame Street. But do you know what it’s like to work in an office with someone who has so much Christmas cheer that you want to stab them with a candy cane? And not even take the time to lick it to make sure it has a pointy end like every asshole child would do in elementary school. Just take the damn thing out of the box and go straight for the eyes. Fuck whatever happens after that.

Here is what I want. I want find the worlds worst nutcracker. So, your mom. And I want to build a fire so big that it can be seen from the heavens above. You will bring me something that will cause that ass pickle to fall asleep. And when he does, I am going to impale him on a stick. Almost like a supple pig with an apple in his mouth. And I am going to roast his chestNUTS on an open fire for hours. And once they are good and roasted. I am going to put his pistachios in the nutcracker. And have that toy solider chomp on his nuts as if he was a squirrel preparing for winter. And once that is complete, I will walk over to him and kick dirt in his face while laughing hysterically.

Just typing that gave me a stick figure boner. I felt a rush come over my body as if I had taken the best drug in the world. I assume the only rush that comes over you is when you stand up.

Also, we have to go through this song and dance every year. Where is my damn slinky? At this point, I am tempted to steal a spring off of some kid’s trampoline. One, because that is all a slinky is. And two, I love watching videos of people falling through trampolines on YouTube. I am a Stick Figure who likes to watch the world burn. 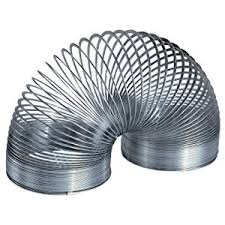