Breaking News? Coronavirus Task Force is Out. Pence To Be...

Washington DC (TBK)- As the country is dealing with the fallout from the Coronavirus, a shakeup is happening in our nation’s capital. The Coronavirus Task Force spearheaded by Vice President Mike Pence was not meeting the demands or requests of President Trump. In a move that surprised many leaders of both parties on Capitol Hill, President Trump tweeted today the following: 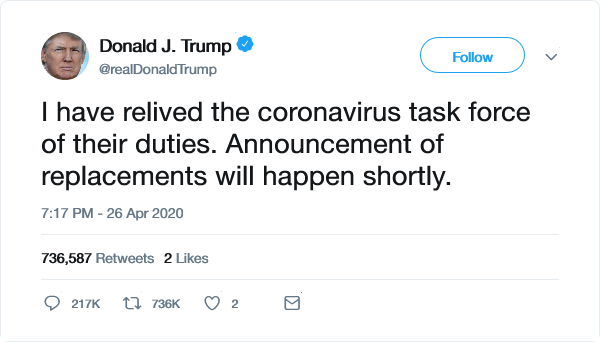 “The Vice President will be able spend more time with Mother. We will release a full statement within a few days.”

Trump and the Task Force are taking criticism from all sides on how the administration handled the spread of the virus in the United States. Each press briefing ended with the president saying something deemed unintelligent and causing a dumpster fire headlines for publications across the globe.

A press release from the White House sent 20 ago minutes from the future designated the new individuals who will be joining President Trump’s Coronavirus Task Force 2.0. TBK Magazine is the first outlet in the country to break this news.

The new head of the task force replacing the Vice President Pence is Mr. Clean. Mr. Clean is a leader in cleaning surfaces since 1958 and looks to bring that same cleaning knowledge to the very complex human body.

The Arm from Arm & Hammer. (The arm will be used as a testing subject)

A container of Lysol Disinfecting Wipes

The First Teen Who Survived the Tide Pod Challenge

And the Cottonelle Puppy as a distraction when a statement is falsified.

The new Task Force begin their new job immediately. We do know Dr. Seuss was asked to be part of the new task force but turned it down due to a worry that he may confuse the president with actual words from the English language.

TBK Magazine will have more on this breaking story as it develops.