Wrestling Is Ready For A Change But Are We the...

I am not sure how to feel at the moment. Let’s cut to the chase, I am a wrestling fan. I used to wear wrestling shirts to school at least once a week. And the one thing that stands out in my mind is the constant harassment I would take from my peers. But I never let that deter from sitting on my couch to watch each week. Some fans deserve a patch for surviving the Monday Night Wars. I wear that fandom with pride. And for the longest time, the only promotion on a truly national level is WWE. The company that gave the world John Cena, Randy Savage, and Doink the Clown would become the only mainstream place for wrestlers to work. Over the past decade, that is finally changing. New promotions are rising to bring wrestling into a new light. However, after today, I am just confused.

Last month, WWE released a statement that said the following:

WWE has substantial financial resources, both available cash and debt capacity, which currently total more than $0.5 billion, to manage the challenges ahead. The fundamentals of the Company’s business remain strong reflecting the passion of WWE’s fans and the quality of its content. Management continues to believe the Company is well-positioned to take full advantage of the changing media landscape and increasing the value of live sports rights over the longer term.

The health and safety of WWE’s fans, performers and employees are the Company’s top priorities and management is monitoring the situation closely domestically and internationally.

The statement above was sent to the investors of the company. COVID-19 is turning our world upside down, a statement sent out such as this by a major company is to ease panic among investors. I feel doing this is understandable and does not seem out of the ordinary. But yet, here we are a month later, and WWE announces the company will be furloughing employees and releasing talent. How did we get from Point A (the Release) to Point B (Laying off employees)?

If you researched WWE at all on the financial side, you are aware live events lose money. Production costs will be lower due to running out of venue the company owns and not an arena weekly.

Before we get to what happened today, let’s talk about the second elephant in the room. And yes, that is a political reference. The state of Florida deems WWE and pro wrestling as essential as long as the company has a national audience. I am all for entertaining us during this time, but even I, a lifelong fan, understand that wrestlers have to travel across the country for shows. How in the hell is having the individuals keep flying to shows keeping them safe? I need that answered. As you know where there is smoke there is fire. A day after Governor DeSantis made the addition for wrestling on a closed set, A Super PAC led by Linda McMahon gave the state $18 Million. For those of you do not keep up with politics, here is an explanation by Merriam Webster:

a type of independent political action committee which may raise unlimited sums of money from corporations, unions, and individuals but is not permitted to contribute to or coordinate directly with parties or candidates. 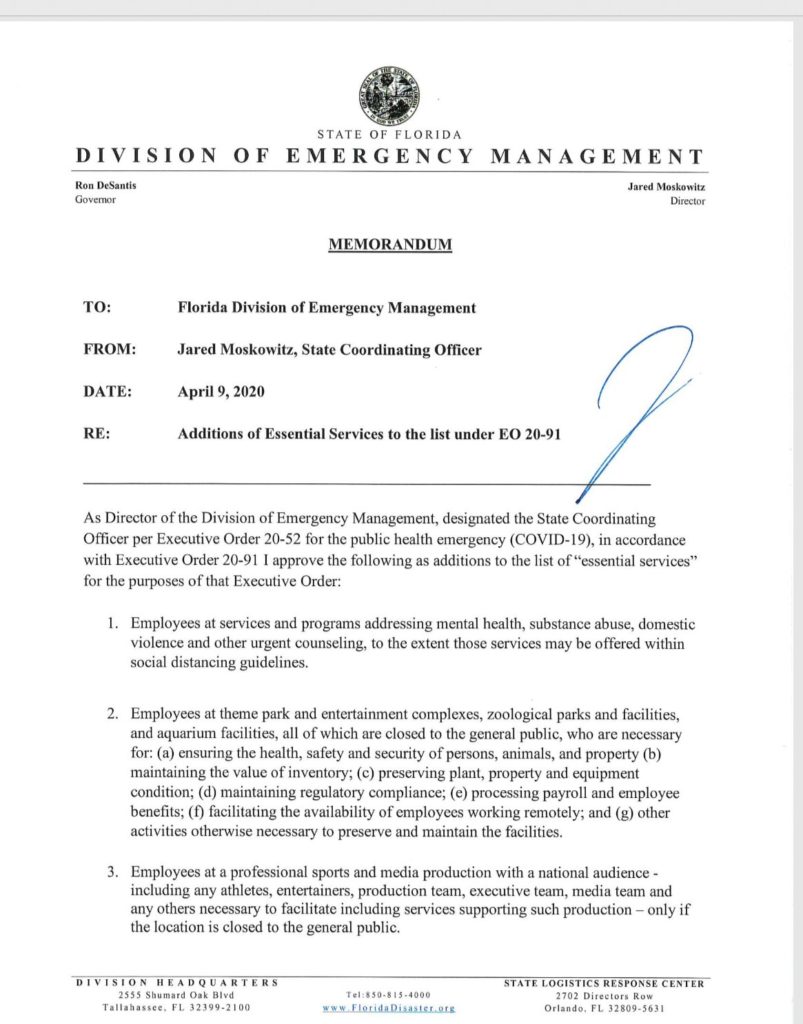 WWE is considered an essential business by the state of Florida. And that brings us to today, the WWE releases and furloughs. All the good thoughts I had about the company, thrown out the window in the span of just a few hours. Below are the names of talent and creative released that we are aware of thanks to Fightful.com and Sean Ross Sapp for keeping the story moving as the day progressed.

The 38 names listed are just on-air talent. And I have a bad feeling more will be added to this list in the next few days to a week.

I want to single out a few of these names. Over time we are going to learn a lot about this story, we are going to learn the real reason this happened. I do not believe the company is hurting. And if WWE is a sinking ship, we will learn more when they release their first-quarter earnings report in the next few days.

I want to start with Rusev. He is going to be a megastar when wrestling starts happening again, but this man went above and beyond to help the production staff. He gave the staff 25,000 from his pocket to help out with life as a lot of production team was not able to work. An act of kindness from a true star in the business.

In Bulgaria we say “ It’s not a lot but it’s from the heart” I pledge 20,000$ to any of my WWE extended family that are sitting at home without income. WE can’t do it without y’all. Production, security, etc. LOVE YALL.

Referee Mike Chioda has been with the WWE since 1989. The man has seen the best and worst of times as an employee. And today his career ended after a 5-minute-wide company phone call from Vince McMahon.

I want to share Drake Maverick’s video with you. More so for the non-wrestling fans who happen to stumble upon this article. Drake went by the name of Rockstar Spud in the UK and Impact Wrestling. For around 2 years, one of the biggest stars in the company was this man. And WWE did not take advantage of that. He is a hell of a performer.

No Way Jose flew from California on a plane without anyone on it to be part of Raw on Monday. Two nights ago, this man was wrestling for a television audience.

So, why am I confused? I know as a fan; we cheer for our favorites and boo the individuals we can’t stand. I have a lot of wrestlers in WWE that I will always be a fan of theirs. I love The New Day. The chemistry those three men have together is something that can bring a smile to anyone’s face. Zelina Vega is not just a wrestler, but she is a cosplayer, video gamer, and part of the lifestyle we have embraced as a Magazine, geek culture. And I want to continue to support my favorites, but every coin has two sides.

WWE taped a lot of content including Mania, and the show this year was special. With everything happening in the world, Mania became a relief. However, the company decided to go back to doing their shows live each week. Three shows a week, live in front of no crowd. As I said about No Way Jose’s travel to Raw on Monday, each person that travels from all corners of the country is risking their life. The statement of we need to protect our performers from their released statement last month is total bullshit. And I understand it’s a business. Disney just furloughed 43,000 employees. But WWE as of 2017 employed around 850 people, we know the number is increased, let’s say 1,000 people work for WWE. We are not aware of the corporate layoffs or other talents that are furloughed. Something reeks. Furloughing employees is one thing, their jobs will be there when the time comes. But, completely firing people is irresponsible. The rumor mill is running wild that the company made these moves to make sure they hit their projections at the end of the year. Who gives a shit about the numbers at the end of the year? The fact you kept your employees in the middle of a crisis our generation has never seen, and possible will never see again, speaks volumes.

And thus, the place I am in. The debate happening inside my mind. Supporting the talent because they have nothing to do with what the company does with its employees or stop supporting WWE? As I wrote in my Wrestlemania review, I hoped that when future generations discussed this moment in time, wrestling would have a positive light. In 5 hours, WWE tainted that.

So why call out WWE and no one else? Because the other companies in the US and World are doing their damn best to try to keep their talent. NJPW represented the entire wrestling community in front of the government of Japan. Hiroshi Tanahashi, a living legend in Japan made the statement wrestling should be the last thing to return. Once wrestling returns, that means the Japanese entertainment industry has properly recovered.

And New Japan and Tanahashi went and New Japan has contracted wrestlers who are paid, so aside from health, they fought for the guys in the small companies who are badly struggling. Can you imagine Hogan/Vince going to Congress to ask the government to help small companies? https://t.co/q6x3IfIBuu

I am not sure what my future holds as a fan of WWE. I honestly may never watch the company again. But I do know this, this is not 2002. We get to live in an era of wrestling where there are alternatives. The last show that I might get to attend for at least a year was AEW Revolution and that show was phenomenal. Besides AEW, New Japan Pro Wrestling, GCW, Impact, Hoodslam, Beyond, Prime Time Pro Wrestling, PWG, Chikara, Bar Wrestling, and I know I am forgetting companies that should be listed. But WWE is not the end all be all of pro wrestling anymore. Wrestling is ready for a change but are we the fans ready?