Review of Serpentine by Phillip Pullman 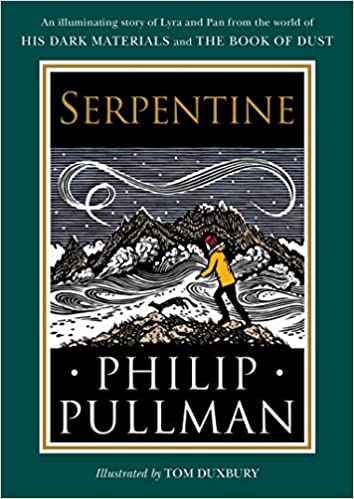 For those that enjoyed the series His Dark Materials comes a much shorter tale of Lyra Silvertongue. Written by Philip Pullman and illustrated by Tom Duxbury, this very short story takes place sometime after the events of The Amber Spyglass.

It was a short read. I started and finished it while waiting in a doctor’s office. Which, in retrospect, isn’t an indication on how long it would take someone to read it. For me, it was less than an hour. However, having read Pullman’s other books, I was familiar with the characters, plot, and locations. Having enjoyed the past books, I devoured Serpentine much like a snake devours a mouse. In one quick gulp.

Lyra and her daemon, Pantalaimon, journey to the north to talk with the witches and seek their consul regarding a very personal matter.

The illustrations in the book are plentiful and lovely. Duxbury illustrates Lyra and Pan’s adventure to the north in simple black and white art that accompanies Pullman’s narrative on each page turn.

If you’re expecting some massive character growth from Lyra and/or Pan, I wouldn’t hold your breath. Readers shouldn’t expect battles between bear kings or aerial battles with witches. By the end, while they may be the same characters, they’ve developed their own relationship. 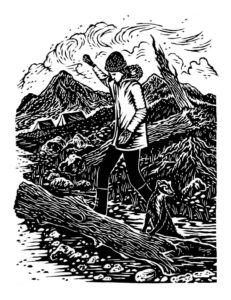 It’s a simple story featuring two beloved characters, illustrated in the same simple manner. For those that are fans of the prior series, this will be a nice welcoming return to Lyra’s world. For those that have never read a single page before picking up Serpentine, it will be an odd introduction but one with a very relatable message.

Just like the story, I will keep this review brief. Now, go read Serpentine! It’ll only take a few minutes, but you’ll remember it for longer than that.