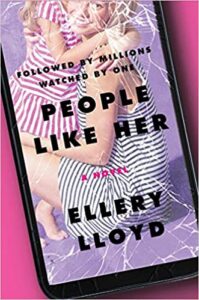 I recently made the decision to take a break from social media. Having then read this book from the debut husband-and-wife writing team writing under the pseudonym of Ellery Lloyd, I’m pretty sure I made the right choice.

The description of the novel advertises that it is “a razor-sharp, wickedly smart suspense debut about an ambitious influencer mom whose soaring success threatens her marriage, her morals, and her family’s safety.”

In truth, the novel lives up to that description. Essentially, the story is centered on three point-of-views: Emmy Jackson, Dan Jackson, and the stalker. Emmy Jackson is the breadwinner of the family. As a social media influencer known as @the_mamabare, Emmy became famous by using her children to craft herself into an Instagram “instamum.”

Dan Jackson is Emmy’s husband who lives in his wife’s shadow. Before Emmy became famous, it used to be the other way around. Dan published a novel that was very successful, but he couldn’t quickly follow-up on the success and now his writing career has gone stagnant. He has machinations of finishing the second book and becoming famous again so that he can support his family and allow Emmy to quit being a social media influencer.

The stalker is well… a stalker that has a grudge against Emmy for an unknown reason. As the story progresses, we find out that reason and what the stalker plans to do about it.

The actual action of the story is slow. I’d compare it to a kettle on the stove, slowly heating up until it bubbles over. If you like a character driven story instead of an action driven one, then this would be your cup of tea.

Lloyd does an excellent job developing the three main characters. Emmy, Dan, and the stalker are characters that every reader can both relate to and despise. All three are unreliable narrators in that they see things as truth. The stalker believes that it’s Emmy’s fault for what happens. Emmy has grown so comfortable in her role as a social media influencer that her real life and her Instagram life have melded together. Dan believes that he can be both the supportive stay-at-home husband and a famous author.

It’s almost to the end of the story where the three characters finally meet up. And it’s a bit of a shocking one. The ultimate ending though was one that I didn’t see coming and I was both disgusted and pleased with it.

Lloyd also does a great job at calling out the fallacies of social media influencers. When Emmy’s narrative takes over, the reader gets to see inside the mind of a professional influencer, albeit a fictional one, but it most likely isn’t far from the truth. There’s one scene that sticks in my mind where Emmy is preparing for an interview. Instead of cleaning up like most of would, she and her daughter take time to mess things up in her daughter’s bedroom to make it look less pristine, more lived in. There are also scenes where Emmy will give a speech and Dan will take over talking about how things really happened.

If you’re looking for a novel that’s a thriller and could possibly hit close to home, then I’d suggest People Like Her by Ellery Lloyd. If nothing else, it’s a cautionary tale of what not to do if you do choose to become a professional social media influencer. However, you might want to stay off social media while you’re reading it.

A natural born reader, James tackled the works of Stephen King and Michael Crichton when he was in the sixth grade. His influential young mind, now twisted by the science fiction and horror genre, James did what any respectable young man would. He began crafting stories. Instead of playing in recess, James would write stories about dinosaurs and serial killers. He hasn’t stopped writing or reading which is where his path crossed with Burning Willow Press, LLC. Ironically enough, you can find James’s first published work, “The Dark Forest,” in the anthology “Crossroads in the Dark II: Urban Legends” published by Burning Willow Press. His first book, “The Book of Roland” published Feb. 25, 2017, is a 2017 Summer Indie Book Award nominee. It is the first of seven in the Soul Eater Chronicles and it is centered around a katana wielding, gunslinging, pop culture referencing monk named Timothy as he fights the incarnations of the Seven Deadly Sins. His next book, “The Book of Mark”, is scheduled to come out early 2018. James graduated from Indiana University South Bend with a Bachelor’s degree in English and a Minor in Film Studies in 2015. By day, James works as a mild-mannered reporter for The Pilot News as well as an editor for the weekly paper The News-Mirror. By night, he works for BWP reading submissions or writing his own works.