Review of The Space Between Worlds 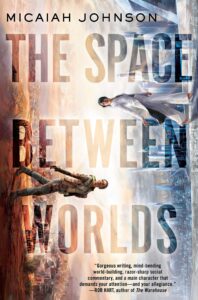 The debut novel by Micaiah Johnson, The Space Between Worlds, taking readers into one of 372 worlds that are parallel to each other. One of those worlds, Earth Zero, has invented technology that allows travel to the other worlds. The only stipulation is that you can’t travel to a world where you’re still alive.

Enter Cara, the main character, who is only alive on a handful of alternate Earths. To the company, she is priceless… for the moment. There’s always a looming threat that technological breakthroughs would render the human traversers (the name given to those that travel the alternate Earths) redundant.

And there’s one of the bigger themes in this novel. For some reason, the world has devolved from ruling nations into a group of city-states. Outside of Wiley City, there lies a desolate wasteland that’s ruled by an Emperor. Cara is from the wasteland and if she loses her job, she also loses her status as a Wiley citizen. If that were to happen, she would have to return to the wasteland. Johnson does a great job at portraying the difference in class while in the City and in the Wasteland.

Another theme, albeit a lesser one, is that of religion vs science. With each new section comes a small paragraph about two differences in views. The scientists would say one thing while the theologians would speak their thoughts about the same topic. Cara on Earth Zero comes from a very religious background. While Johnson does a great job with the larger theme, this theme of religion vs science lacks substance and isn’t explored as much as it could have been. It’s mainly used for the convenience of the plot.

The character of Cara is an intriguing one. She’s likeable and relatable in her desire for the most basic need: a safe place to call home. She fights aggressively for her right to stay in Wiley City and to stay close to her love interest and handler Dell. It’s a romance that’s not reciprocal, however. In fact, Cara believes that Dell has feelings of distain for Cara because of her class and background.

The main plot isn’t that thrilling, which is sad because with such on interesting world, Johnson could’ve crafted a narrative that played into the multiple themes of the book. However, the plot leads up to a rather anticlimactic ending that left me wondering whether I liked it or if I didn’t.

What I would have liked to see more of in this story was more explanation into why the world went from nations to city – states and explain more of the backstory. The multiverse concept was interesting and while Johnson didn’t exactly explain the science of multiverse travelling, I was okay with not knowing.

The reviews on Goodreads have this book sitting at four out of five stars with 10,516 ratings. It seems that this wasn’t exactly my cup of tea. Based on my own opinions of The Space Between Worlds by Micaiah Johnson, I can’t endorse reading it. However, since we all have different tastes in literature you may find this book more interesting.